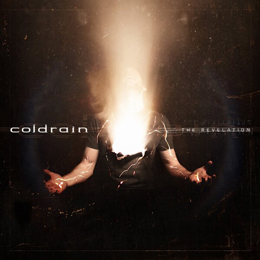 't Was in the spring of 2007, when 5 members (more specifically, lead singer Masato David Hayakawa, lead guitarist Yokochi “Y.K.C”, rhythm guitarist/ backing singer Kazuya “Sugi” Sugiyama, bassist Ryo “RxYxO” Shimizu and drummer Katsuma Minatani) of two Nagoya based Japanese bands (that having been mentioned, you have no more reason to mistake this band for the Moberly, Missouri based Atmospheric Metal act which released its debut album Walking With The Forgotten in 2013 – besides, the Japanese band's name is stylized as coldrain!) decided to get together and rise from their strictly local status to something more worthwhile in the Metalcore genre.

It would seem that their combined efforts really worked, for only a year after becoming a band, the quintet signed onto the roster of Japanese major label VAP Inc and ensured the help of the outstanding management agency Gil Soundworks. The single “Fiction” would be the first result, and soon after its release the band was already opening the first ever Taste Of Chaos Japan tour, which also featured international bands such as Story Of The Year and As I Lay Dying. April 2009 saw the release of the band's second single “8 AM”, which would go on to be used as the ending theme of the popular Japanese anime television series Hajime No Ippo. That Summer the band played at one of Japan's biggest Rock festivals, Summer Sonic, and a short while after that the guys entered the studio to record what was to become their debut full-length Final Destination.

Containing the two previously released singles, the album was released on September 28 of that same year. The promo video for the album title track got well over one million views on Youtube, making the song a fan favorite during live performances, like at the first edition of the April 2010 Japanese Punk Spring, where coldrain shared the stage with such great acts as New Found Glory, Youmeatsix, and 311. New work by the band arrived on June 23, 2010 in the form of the 6-track EP Nothing Lasts Forever, and its leading track “Die Tomorrow” went on to be used in one of the biggest Japanese-made sports video games...which introduced the band to a worldwide audience. With over 2 million views on YouTube, the song's music video remains one of the most popular on the site. The EP (which also featured a cover of Stacie Orricos' smash hit “Stuck”) brought more success, as the track “We're Not Alone” was used as opening tune for the National television aired anime series Rainbow. That Summer the band opened the main stage (which was to host the likes of 30 Seconds To Mars and Smashing Pumpkins that same day) of Summer Sonic.

In early February 2011 coldrain released its sophomore full-length The Enemy Inside, containing the singles “To Be Alive” and “Rescue Me”. The headline tour the band did throughout Japan in support of the album found many a venue (some of which up to a capacity of 1,000 fans) sold out, and the last three dates were filmed to be made into the band's first ever live DVD Three Days Of Adrenaline, which was released in early December that same year. In the 2012 Spring, the band traveled to New Jersey, to record its second EP Through Clarity with the award winning producer David Bendeth (known from collaborating with the likes of A Day To Remember, Bring Me The Horizon, and Paramore). Released in July, the EP debuted the Japanese daily charts at #8, and at #14 on the Japanese National Chart on its first week. Also, the EP's leading track “No Escape” was used in the TV commercial for the video game Resident Evil : Operation Racoon City. In September the band started a new headline tour of Japan, selling out each of the 11 venues it went through, and after that the band returned to New Jersey to record their third album The Revelation, again with Bendeth!

Prior to the album's Japanese release on April 17, 2013 (when the album got a 4th position on the Japanese daily chart, leading to a #7 position on that week's national charts with over 10,000 copies sold), coldrain flew to Taiwan to perform on the main stage of the Megaport Festival in front of more than 5,000 enthusiast fans. They returned to Japan in March to co-headline the Monster Energy Outburn Tour, finding every show on the tour completely sold-out. In December then, the band signed with Raw Power Management, and this allowed the band to tour Europe with Bullet For My Valentine in early 2014. On April 9, 2014, the band announced that they had signed to Hopeless Records, with the first part of their deal being the worldwide distribution (excluding Asia, New Zealand and Australia) of their last album...which eventually brought the band under our attention. And, listening to the album has had me wondering more than once why this great band had not broken through internationally much earlier!

Because these guys are simply GREAT, their music embodying the very essence of what makes Metalcore so popular in the US : simple-sounding low-end rhythm guitar backed by an inventive bassist and thunderous drummer, and topped by a lead guitarists whom gyrates through the songs from accompanying his fellow guitar playing bandmate with wacky stuff, to bringing in the melodic side of the music, occasionally even goin' somewhat atmospheric (to be truthful, I've suspected the producer of using the occasional keyboard here and there, but you know, those things can all be accounted for by the use of some rather sophisticated sound effect pedals as well – something which however definitely cannot be said of the string sounds in the album closing “Chasing Dreams”). Actually, it's real hard to explain what the lead guitarist brings in here, and the only thing I can say about the guy, is that he's a real artist on his instrument! But the most important element which elevates this band from what one usually finds in Japan, is the lead singer. Born from a Japanese father and American mother, he masters the English language perfectly, and that's very important when doing his type of soaring medium-high pitch vocals. You see, the average Japanese singer with good knowledge of the language might usually get away with singing in a rougher voice, but as soon as they get to Masato's level/ type of singing, a typical accent will usually come through!

In other words : here's a band meant for world domination, as far as the heart-break Metalcore genre is concerned. You can convince yourselves of this band's qualities, by checking out the videos for this last album's tracks “You Lie” and “Behind The Curtain”, which are posted in the “Timeline” section at (www.) facebook.com/coldrain (the band's official website, really). Somewhere in that same section, there's a possibility to listen to samples of some more tracks on the album...and at YouTube you should also be able to find music clips for the album's opening track “The War Is On” and the ensuing title track, as well as for previously made music videos (mentioned above).

Since the release of their last full-length, which is their most current one as far as we're concerned on this side of the Globe, the band has gone on to record a new EP. Entitled Until The End, the little gottahave was released on June of last, containing six new songs. And now for the last bit of good news on this wonderful band : in November they're back in Europe, tentatively to support Of Mice & Men at shows in Wiesbaden and Munster (on the 5th and 11th respectively). Let's hope the band has meanwhile found gigging opportunities outside Germany as well, eh?