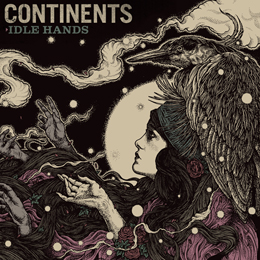 The United Kingdom has brought forth lots of new hardcore and metal blood over the past few years. Just think of bands such as Your Demise, While She Sleeps, Brutality Will Prevail, Last Witness, Desolated, ... Although the guys in Continents look like the perfect sons-in-law, they play the hardest music possible. These five lads from South Wales have just released their first full length through the Victory Records label, which was the break through label for A Day To Remember, which is now one of the biggest hardcore bands in the USA and Europe. Continents can be compared to that band, but Continents is much heavier. Although they also have a softer side, which you can hear in Pegasus, Pegasus, where they prove that they aren't afraid to use clean vocals. But still, the one thing all songs have in common, is its furiosity. Continents doesn't reinvent the wheel with Idle Hands, but they just do their thing in a very professional way.
Fans of Emmure, The Ghost Inside and For The Fallen Dreams should definitely check out Idle Hands by Continents. They might just be the next big thing in 2013.