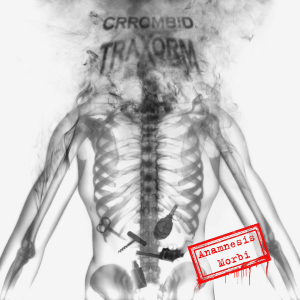 During the (late) Eighties / early Nineties, there was a huge, active worldwide Thrash Metal scene; or at least, that was the case within the western hemisphere. We (and then I am talking about people living in (West) Europe or (North) America) weren’t that trusted with the scene behind the Iron Curtain. But you know, in fact there were quite some things brooding out there. Even though being extremely ‘underground’ at that moment, the scenes from e.g. the former Soviet Union, Poland, former Czecho-Slovakia, etc., did house a vivid Metal scene as well. We do all know a couple of names, of course.

A name I had not heard of (until now) is Crrombid Traxorm (not written incorrectly), which was a Thrash act that started in 1990. During the nineties, they recorded some demonstrational recordings (back then on tape), as well as a full-length called The Stogoff Family’s Death (independently released, 1994), and some of the previously unreleased demos got gathered in an extremely limited compilation in early 2020. Anyway, the band did split up in 1997 or so, and the rest is history…

…until now. Two of the original members, vocalist / lyricist Oleg ‘Dr. Von Koenitz’ Kunitzyn and guitar player Anton ‘Wrongweed’ Manuylov, decided to reform Crrombid Traxorm about one year ago. As said, there was that compilation with old but officially unreleased stuff, and with assistance of several guest / session musicians, they re-arranged and re-recoded material from especially their first demo, 1990’s Anamnesis Morbi at the Arse Soundprint studio. The mastering was taken care of by Aleksandr Perfiylev (think: Cortex Impulse, Exicheira, Armaga a.o.). This time, the release will happen through a professional label, i.e. Wroth Emitter, which is run by Halter’s Alex (among others). Both the band and the label did collaborate as well during the last decade of the former millennium, by the way. It comes on compact disc, which has unusual yet appropriate cover artwork (courtesy of Vladimir Kalinov).

As from the intro, you’ll have a clue of what to expect. As weird and unusual as the cover artwork, so is the eccentric Thrash Metal from Crrombid Traxorm. And above all, they were like visionaries, ahead of time. This material is enormously progressive, with room for experiment, creativity and open-mindedness. I repeat: this was originally written about thirty years ago! Okay, Death, Pestilence and many more; trespassing borders and boundaries was not completely new – yet still…

The main structures are based on a forceful foundation of strings (with remarkable bass lines) and strong, varying drum patterns. The guitars vary a lot, with fiery solos, avantgarde rhythms, pounding riffage and striking melodies. The drums too are, as mentioned, somehow unique, with such powerful execution and a striking variation in performance.

But there is so much to experience. The main voices are Death Metal laden grunts, quite deep and gurgling, and a lot of somewhat punky lead vocals, yet several female ‘operatic’ chants (with that typifying soprano-like timbre) and ‘clean’ female vocals, whispers, spoken word, anthemic choir stuff etc. pass by as well. Furthermore there is cello and violin (Stadiums/Dinosaurs) and even trumpet (Damage In The 21st Chromosome), there are those many jazzy constructions (cf. a piece like New Vaccine; quite prophetic track, don’t you think), the use of samples (such as the outro of Rising Reanimation), a permanent diversification in tempo and structure, weird and often unexpected breaks, the injection of funny things (such as the humppa intro on the classic-to-be anthem Stomatologic Operation), and so on, and so on.

Anamnesis Morbi is an experiMENTAL adventure, an experience that needs determination, endurance, persuasion and perseverance for sure. You do not need to take all this too seriously. There is a lot of irony and even sarcasm behind this band’s concept, and there is nothing wrong with the combination of humour and a progressive execution of (Thrash) Metal. Okay, this stuff is not meant for everybody (at all); I’m pretty sure many will quit after a short while. But in case you can see through this mist (actually, it’s rather a thick layer of smoke, caused by burning green herbs, you know), this mixture of timeless Thrash Metal with elements from Progressive Metal and Avantgarde Death Metal, aspects from Hip-Hop, Punk and Djent, and self-made influences created in twisted and intoxicated brains, might cause pleasure and fun. And whether you like it or not: it surely is ingenious, seen the context (time and place of initial song writing).