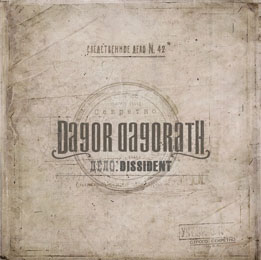 I like to read the great works by the hand, and mind, of J.R.R. Tolkien. Everyone knows The Lord Of The Rings and The Hobbit in mean time, thanks to the two movie-trilogies, but Tolkien’s other works are at least as interesting, if not more attractive! In The Lord Of The Rings, the ‘Dagor Dagorath’-battle gets mentioned, but there was a first reference to it in the posthumously published The Silmarillion (the Valaquenta-edition, more specifically).

Dagor Dagorath is the name of one of Israel’s most interesting bands too (and convinced warriors against fascism). After some demonstrational and split releases (re-pressings of the demo, actually), this band had a first grandiose album out in spring 2010, via Twilight Zone (title: Yetzer Ha’Ra). In the Archive-section of Concreteweb, you can find the review undersigned did for that album on the 25/04/10-update, by the way, in case you’re interested (why shouldn’t you anyway, haha!). Dissident is the second full length, recorded at the Eli Picover Studio in 2013. Line-up is: Vorog (guitars and screams), Getman Azach (keyboards and grunts) and Mizgir (bass). And before focussing on the album’s content itself, first this. The album gets released via Death / Black-oriented label Darzamadicus Records, a label from Macedonia. Indeed, even there, in that former Yugoslavian republic, do live people with a great taste for Music! This label, run by Dejan Stojmanovski, released some highly interesting albums in the past too (Dagor Dagorath’s is the twelfth piece of Extreme Metal), so check them out and support the Underground!

Anyway, Dissident… Like the former album, this one reminds me a lot to Dimmu Borgir and the earliest works of Vesania, with hints of Emperor, Limbonic Art or Grievance. That means bombastic and orchestral, yet extremely intense and heavy Symphonic Black Metal with lots of keyboards, a skull-crushing rhythm section, speed-up riffing and bone breaking leads. Playing this kind of material isn’t that unique or special anymore, but Dagor Dagorath once again convince with very varying and highly qualitative, somewhat Neanderthal compositions. And what’s more, they succeed once again to have this whole journey drenched in a mostly muddy and obscure atmosphere.

In comparison to the former album, this one did slightly progress into a more modernistic album (cf. the few electronics), with little more catchiness within the tracks, but with a more aggressive approach too. These epics, despite the increased catchiness, didn’t give in to boredom at the one hand, or cheapness at the other. No, all these compositions do convince, and on top of it, they come with a sound that is clean and decent, yet not too over-produced either.