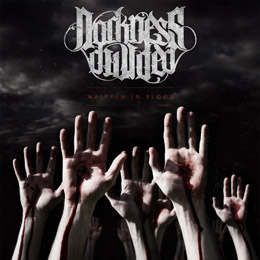 Darkness Divided is a Christian Metalcore band which originated as a worship act at church youth retreats, where Gerard Mora (lead unclean vocals), Christopher James Mora (guitar & backing unclean vocals) and Joseph Mora (bass) played songs in the Jeremy Camp and Third Day style. Influenced by the likes of The Devil Wears Prada and As I Lay Dying, the guys went for a more Metal type music, recruited Israel Hernandez as their drummer, and played their first gig somewhere in 2010.

Soon after, the band released the single “Divide And Conquer” through their own website. In early 2012, the band traveled to San Diego, California, to record some tracks with Daniel Castleman (known from collaborations with the likes of As I Lay Dying, Impending Doom and War Of Ages, among others) at Lambesis Studios, with as result the 5-track EP Chronicles, which was self-released the same year, in May. During 2013, the band again recorded and released two singles (“Redeemer” and “Voyager”) for which they also made video clips. That same year the band also started working on the material for their full-length debut, releasing a single and video for the track “Remnants” later in the year. Meanwhile, the band signed a deal with Victory Records who, prior to the album's release, issued the singles “A Well Run Dry” (also got a video made) and “The Hands Than Bled”. Along the way, the band has played over 150 shows in clubs and at festivals throughout the US, and have shared stages with the likes of For Today, Haste The Day, and Underoath. The quartet also, at some point, grew to become a fivesome, through the addition of rhythm guitarist/ clean vocalist Sebastian Elizondo.

The album, recorded & mixed by producer Cory Brunnemann (whom helped the band in parts of the song arrangements, wrote several bass parts, and added extra guitar, bass and vocals) at San Antonio's Alchemist Recording Studio, contains a total of 11 tracks, three of which are short instrumentals. Expect the music to be packed with catchy guitar melodies and singalong passages, in which the band put their not-so-subliminal Christian messages. There's a nice technical prowess, both in play as in composition, which will even attract some of those who're generally nót into bands that mix religion in their music. At (www.) facebook.com/darknessdivided (the band's official webspace), you can listen to the entire Chronicles EP, the two interim singles, and watch an animated stream of “A Well Run Dry” as well as the video for “Remnants” (and lyric videos for 2 songs off the EP). A total of 5 videos can be viewed on the band's page at (www.) spirit-of-metal.com.

With more Metal than Core, the music is indeed of a very high calibre and should, by all means, get the best of ratings, but then there's the message behind it all, isn't it...and since other (“more professional”) outlets have been somewhat divided in their ratings (even the “Christian” music sites, for that matter), I don't see why I should not let some personal issues get in the way of giving Written In Blood a less than perfect rating.