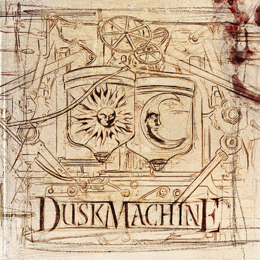 In 2004, the band formerly known as Deception [which was founded back in 1995, and in 2004 was composed of singer Hagen Hirschmann (also know from Desilence, Logar's Diary, Dawn and 7 Seals), guitarist Nikolai Wurk, bassist Peter Habura (see also Necros Christos), and drummer Randy Black (see also Primal Fear, Annihilator, Rebellion, Rooky)] changed its name to Duskmachine, and immediately set forth to write the material for their concept (based on the writings of 18th Century author E. T. A. Hoffmann) album The Final Fall, using low tunings to create a dark atmosphere to accompany the even darker lyrical contents, combining groovy Thrash Metal with progressive attitudes.

A style which got the band comparisons to the likes of Grip Inc. and Nevermore upon the release of the album in November 2005, as well as positive reviews...and it looked like the band was set for a swift ascent to success. However, the band was then struck with a couple of line-up changes at the most unsuitable moments (Habura already left in 2005, and was not replaced for a long time; the lead singer left in 2006 to be replaced in 2007 by Mirko Prietzsch, of Procton and Respawn repute), and this evidently halted their progress. Still, rather than throwing in the towel, the core members persevered, and eventually (in 2010) recruited bassist Russ Bergquist (see also Lalu, White Wolf, Freaks By Nature, and...most importantly – you'll find out why later...Annihilator – for now, notice already the fact that Black had also spent time in that notorious Canadian Thrash Metal band) prior to getting into the recordings of this very album. But then tragedy struck again, when in the middle of those first recordings Prietzsch decided to focus his interests in other projects, and left his bandmates without a lead singer!

The others left little time to pass, and immediately sent some of the already recorded material to one Joe Comeau whom, as you might know, was once a member of the bands Overkill and...Annihilator (as well as of Ramrod, Jack Frost and Tad Morose, and currently also still a member of Liege Lord – at least, as far as I know)!!! Comeau listened to the material and, having already spent time with some of the other guys in the band, immediately agreed to become Duskmachine's new lead singer. Not long after, the band was given the opportunity to join the famous 70,000 Tons Of Metal cruise, which put the band in front of the same selected audience that had come to see play such prime bands as Testament, Exodus, Fear Factory, Iced Earth, Forbidden, Amon Amarth (and many more). In late 2012 then, the band finally signed a deal with Massacre Records for the Summer release of their sophomore album.

Meanwhile, the band made a video for the track “Endless”, using model Joanna Tuczynska in the role of “Religion” and “Temptation”...a video you can view in the “Media” section of the band's own site (www.) duskmachine.com. Also available at that site, a link to the band's page on MySpace (which I could not open due to the browser of the network pc I use for my research temporarily not being supported – in other words, MySpace upgraded yet again, regardless of the upset they create by doing so!). I found an additional track off the album (actually the album opening “I Feel No Pain”) posted at (www.) facebook.com/duskmachine. Both songs represent the heavier and more aggressive side of the band, but there's also some far calmer moments on the album, showing a more sensitive side...such as displayed in passages during the song “Dying In My Skin”, and in the album's ballad (music here is only a very serenely calm played acoustic guitar, a cello, and some bass tracks – well, at least in the first 3,5 minutes of the song, the last minute finding the music adding drum and the guitar changing to electrically enhanced). At any rate, Comeau shines victoriously in both modes, and it's too bad the guys didn't allow post any of those two songs (most probably, your habitual trust-able on-line sales sites will have the album posted, allowing you to listen to 30-second samples of the two, and the other 8 songs on the album).