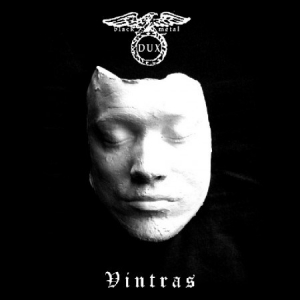 You know (or you do not – what do I care anyway) that I have never disliked writing a review for older stuff. I do it with pleasure 1) to be grateful and to pay tribute to the band or label that send me that older stuff, and 2) when I think that this material is worth deserving some (of mine) additional support and promotion whatsoever. Quite the same goes for this review. It deals with the hateful French horde DUX and their peaceful recording Vintras. I once wrote a review for the band’s EP Lanleff (published on September 27th 2014; it was released via Asgard Hass), and as you can read there (in case you’re interested, and not too lazy to enter the band’s name in the ‘search’-tab), I was sort of euphoric with that vinyl release. Anyway, the devoted Black Metal connoisseur R. from Hass Weg Productions did send me the Vintras album, very kindly asking me whether I was willing, and able (yet at this very moment, I’m still kind of sober, so it will work), to write my thoughts and opinion about DUX’ debut full length album. I will…

Since the scroll-down menu of this program starts as from 2014, and seen that this recording goes back to 2012, I choose to use a moment in the future - we might not be around anymore, but that's another philosophical idea. But I repeat: Vintras was initially released in 2012!

Oh yes, this album is dedicated to ‘toutes les trainées et à tous les minables qu’on a croisé’ – indeed, this album is for you, pathetic human being, and your insignificant meaning of life. Santé!

That’s for the visuals. Now the aural part. Vintras consists of eight songs, ‘sung’ in French, and having a total running time of three quarters of an hour. Everything was recorded by Glaurung Samildanac’h (bass and electric guitars, drums, vocals, music, lyrics, and emptying many bottles of alcohol) and Souffrance (guitars, and as least as much alcohol-in-vein-injections) (PS: both of them are in Orthanc too, another interesting act on Hass Weg Productions, for which I did two reviews before; once again, enter this band’s name and enjoy my highly professional reviewing skills…) at the Lac Studio in the far East of their home country, with mixing and mastering duties taking care of by Scott Burne. It was initially released in an edition of 1,000 copies, so there might still be a couple of them, available for masochistic destruction of your eardrums, and declining degeneration of your (useless) brain…

The album opens with Disciples De Vintras, which starts with a fine, somewhat devoted introduction, classical, with Gregorian chants and piano. Yet soon it transforms into profoundly hateful, perverted, angry and morbid Black Metal. It’s melodic, in a certain sense, with an epic approach in guitar play. Guitars and bass are complementary, composing a structure on which all compositions are based. The lead parts remind me of the ingenious Nordic tendance, with that comparable feeling of superiority, almost hypnotic. I appreciate the fact that the bass lines have been mixed very audibly; too often (yet not in this recording’s case!) you can’t hear them, or just barely. For sure that’s a surplus. The drums are the source of energy going on. The heaviest parts are like driven forth by the power and guts of the whole percussion strategy, yet within the slower pieces too, the drum patterns carry the songs towards a higher level. And then those screams, what a proclamation in sulphur and acid! Glaurung Samildanac’h’s throat is like the mouth of Melkor, envenoming the listener’s brain with its atrabilious and deep-penetrating malignancy. It reminds me of that barb-wired throat of Vintersemestre’s frontman Torso (or was it Flesh?)

In general, the tempo balances in between mid-tempo and little fast. A few excerpts are quite slow-paced, creating a dense, heavy atmosphere, like focusing on the obscurity behind the band’s message. Yet several moments are furious and frantic, covering the whole experience in a veil of rabid madness. It surely represents the disgust and aversion to humanity’s existence. Lovely! And even during those faster, almost blasting eruptions, DUX maintain to express their combination of epic play and hate-spawning. It must be one of the most timeless bands, for they transcend beyond the tradition of the Second Wave, while impregnating their Aural Art with subtle yet prominent elements from the First Wave too – hey, even Metallica get their tribute. Especially some of the solos follow that trend, and so, actually, is the sound timbre of the vocals.

Vintras is an amazing album, and simply a must for every adept of True Black Metal. I like every single track on it, but Terre Brulée for sure is a highlight, a monument! What a finale, what a gargantuan epos!