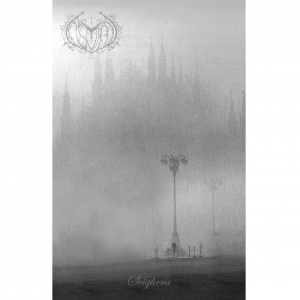 Actually, this new release by Italian project Ensomhet 777, an outfit of Riccardo’19.84’ Z., was released in 2014 via !fanculo!, but I recently did receive a tape-version of that album, done via mighty UK-based Locust Amber Records. And just like acts such as Vinterriket, Moloch or Sieghetnar, this release does not deal with Black Metal this time, yet with floating sounds of mis(t)ery…

Scighera was written, composed and mixed by Riccardo, and it consists of three creations, simply called I, II and III. It’s actually the second tape-release on Locust Amber Records, this time coming on a transparent silver-glittering cassette edition in just 32 copies (and I’ve got mine, so there’s one less left for you).

With this three-piece release, Ensomhet 777 brings extremely psychedelic-mesmerizing Dark Ambient soundscapes, based on minimal soundwaves at the one hand, which are, at the other hand, injected with some cosmic and creepy additions. Like a long-stretched hypnosis-session, a composition like I takes you to dreamy dimensions, untrodden before, to reveal a trans-universal quietude, representing inner excitement and, at the same time, tranquillity and rest. II then again is little ‘lighter’ in essence, less asphyxiating and more spacy (without the joy and happiness). It’s like a Trance-version of an IDM effort, like Fata Morgana (the Mortiis side-project, evidently) being rearranged by Vinterriket. III for sure is the most obscure out of the three, with ominous synth lines, the sound of wind (?) or water waves (?), additional noises and sardonic drum computer patterns. The creation slowly, very slowly, yet unstoppable and mercilessly, progresses and builds up towards martial majesty, leaving no room for compromises or forgiveness.

Despite the length of the tracks, the primal performance, the lack of other instruments or voices, and the freezing sound, all three pieces succeed to keep the listener attentive throughout the whole trans-dimensional sonic voyage.