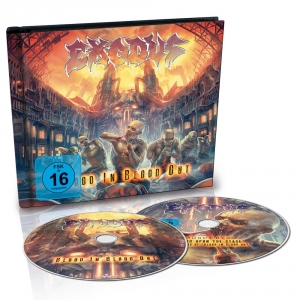 Exodus latest and tenth album is “Blood in Blood Out” and the veteran fans will enjoy this album. Opener “Black 13” starts a little bit like cyberspace feeling sound. But after 1 minute and almost a half the star for real. Again a song with dizzy riffs and straight drum rhythm brings me back to the Trash metal of the eighties. Exodus is one of the trash metal bands that survived more than 30 years all the others are death and buried. But this band is alive and kicking! The title song on the second place “Blood In Blood Out” Nice guitar solo in the middle of the track, not bad for an almost 50 year old guy. But the best song is “Salt The World” with a killer main riff and the lyrics stand with brutality and anger, with a voice from ‘Zetro’ cutting into the song like no other. “BTK” What a groove in this track this one shows that trash don’t have to speed up. “My Last Nerve” takes my attention because this song is slower but darker and mysteriously but stands with a great riff. After 30 years they know to make trash metal like no other. Even when they choose to make it slower everything fits on this album, just buy it you never regret it!