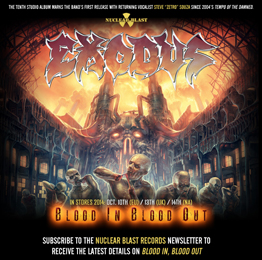 When Exodus initially formed in 1980, ‘Kirk Hammett’ was a big part of the band - with the name of the band actually coming from him, though he only recorded one demo tape with the band, and left shortly after to join Metallica. By this time, the other founding guitarist from the band, ‘Tim Agnello’, had left the band and been replaced by ‘Gary Holt’ - who, to many fans, has become the face of Exodus, being the only member to appear on every album released by the band. Kirk Hammett's vacancy was eventually filled by ‘Rick Hunolt’, though he too left the band in 2005 and was replaced by ‘Lee Altus’. ‘Blood In, Blood Out’ also shows the return of ‘Zetro’ on vocals for the first time since 2004. ‘Blood In, Blood Out’ is the tenth studio album by the band. Nine of the eleven songs on the album (not counting the bonus track) were written by ‘Gary Holt’, and with the other two, ‘Honor Killings’ was written by ‘Lee Altus’, and ‘Body Harvest’ was written by ‘Zetro’,’ Jack Gibson’ and ‘Lee Altus’. ‘Dan The Automator’ guests on ‘Black 13’, ‘Kirk Hammett’ guests on ‘Salt the Wound’ and ‘Chuck Billy’ (of Testament) guests on ‘BTK’.

The record starts with ‘Black 13’, which at first sounds like a very generic intro track. Eventually it kicks in to gear somewhat and after a while we finally hear the return of ’Zetro’... who doesn't sound very good quite frankly. The shrieking, witch-like vocals on display are quite off-putting and the song itself lasts for too long. Though the album starts with one of the weakest tracks on display, it is succeeded by one of the best, in the form of the title track. It has something of a crossover flavour to it, being seemingly influenced by hardcore music.

Perhaps the only other highlight song, ‘Salt the Wound’ comes after the mediocre ‘Collateral Damage’, displaying a high energy approach with some really catchy riffs and a guest performance by former member and ‘Metallica’ guitarist ‘Kirk Hammett’. Despite it being one of the best songs on the record, it's once again let down by some distracting vocal work.

Unfortunately, those two songs seemed like the only ones worth citing as ‘good songs’, as so many others seem to fall short of the mark one way or the other. Some, such as,’BTK’, sound promising but are deflated by tedious moments. Then there are tracks like ‘Numb’, which are poor by the standards of a band this renowned. Three of the first five songs seem a little over reliant on gang vocals, which doesn't always suit thrash and more or less the rest of the album is too generic to even really comment upon. ‘Wrapped in the Arms of Rage’ and ‘My Last Nerve’ are nothing more than bog standard and while ‘Honor Killings’ has some relatively interesting moments, it's still nowhere near remarkable, save for the arguably Islamophobic lyrics. The album finishes with the bipolar ‘Food for the Worms’, which again has some decent moments, but keeps collapsing, leaving the song feeling like a meandering mess.

It's bizarre to think that a band with the ferocity of Exodus could create an album so bland. Though ‘Blood In, Blood Out’ and ‘Salt the Wound’ could be put forward as a defense of sorts, there doesn't seem to be one stand out track on the album. It feels like the record came out too soon, having been released only four months after it was announced that ‘Zetro’ would be taking his old job back from ‘Rob Dukes’, which frankly shows as there are some songs clearly written with Dukes' style in mind. Perhaps it would have been better to wait a little while longer and create new music with more input from the singer, as quite honestly, there isn't a single song here worth rushing ‘Blood In, Blood Out’ into the stores. It's perhaps the weakest album Exodus has released in a long time and will not sit up there with the big hitters in the group's own catalogue.