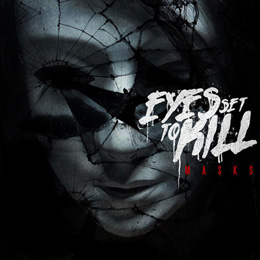 This now Tempe, AZ based Alternative/ Post-Hardcore/ Screamo band was originated in Phoenix (also AZ) during 2003 by sisters Alexia (guitar) and Anissa (bass) Rodriguez, alongside former lead singer Lindsay Vogt, who searched the local scene for musicians (a second singer – for “unclean”, a rhythm guitarist, and a drummer) to join their band.

Although the band swiftly got itself support slots to already established acts such as Chiodos, Blessthefall, Goodbye Tomorrow, My American Heart and Greeley Estates, the original line-up turned out to be quite unstable, with the second singer and the drummer departing that same year. Replacements came in...and went out again in 2005 (in fact, as far as drummers went, ESTK went through a third one before that year was through), when the rhythm guitarist also left, leaving only the girls. New members came in, including current drummer Caleb Clifton and “unclean” singer Brandon Anderson (also occasional keyboardist) whom would stay on with the band until 2010, when damage to his vocal strings forced him out of the band. In 2006 Alex Torres took on the role as rhythm guitarist, and this time the band felt it was time to do some recordings, with the 10-track 2006 EP When Silence Is Broken, The Night Is Torn as a result. 2007 would be another pivotal year for the band, as not only did Torres leave (his role as rhythm guitarist picked up by Anderson), but also Vogt quit (due to a disagreement with the band's management) resulting in Alexia taking over lead vocal duties, alongside her lead guitar playing. As a result of the re-shuffling of internal responsibilities however, the remaining line-up found its stability, which was essential to the band's continuation. To enhance the band's technical play, an additional lead guitarist was recruited in the person of Greg Kerwin. The band consequently toured on the Zippo Hot Tour, supporting Papa Roach and co-headliners HedPE.

The first album in the band's 5-piece line-up would be the February 2008 released Reach, which made good on expectations by hitting #77 and #29 Billboard's Independent Music and Heatseekers charts. Second album The World Outside (claimed by Alexia to be “a lot darker”) fared even better, reaching #26 and #9 on the same charts respectively. In June 2009 Alexia, inspired by the acoustic performance of the band's track “Come Home”, recorded an acoustic EP, which was later to be made available in limited edition at the band's shows only. The band's third full-length, entitled Broken Frames, was released in June 2010, and saw the band jump onto the Vans Warped Tour in 2011. Meanwhile however, October 2010 saw the release of Alexia's full-length debut album Underground Sounds (including acoustic versions of ESTK's songs “Come Home” and “Reach”, s well as a cover of Radiohead's “Climbing Up The Walls”)  under the monicker of Lexia, and January 2011 saw the departure of second lead guitarist Greg Kerwin. Replacing him on tour would be David Molina for the Alaska's dates, and Justin Whitesel stood in on other occasions during the rest of the year. Oh...I'd almost forget...at the 2010 Revolver Golden Gods Awards Alexia and Alissa were nominated in the category “Hottest Chick(s) In Metal. Also, during 2010 Anderson was replaced by Ciscko Miranda on rhythm guitar and “unclean” vocals.

Recordings for the band's 4th full-length White Lotus were done as a four-piece, and meant a break-away for the band from their former label. Having founded their own label, Forsee Records, the album was released through a joint venture with Maphia Entertainment in August 2011. Prior to the album' release (during May and June) the band had already been touring on the Horror Nights Tour with Aiden, get Scared, Vampires Everywhere!, and Dr. Acula. That same year, Alexia was featured in the song “Cross-Eyed Catastrophe”, on Suicide Silence' album The Black Crown. In June 2012, the band announced they would be headlining the Show Your True Colors 2012 North American Tour with My Ticket Home and Awaken The Empire, and a month later announced having signed onto the Century Media roster, an album to be recorded early the next year.

The title of the new album stands for some introspective research on the part of the band's members. As Alexia explains, the band had been doin' meetings with several labels, and it had come under her attention that the band had come through so many changes over the years, and it felt to her like they were wearing masks going into the meetings, trying to impress the other people. It yielded a conflicting third-party perception of who ESTK should be, and at the end it resulted into the self-realisation of what the band actually stands for! So, they would not wear any masks anymore, and be damned with any expectations...they just bunched together, wrote and demoed the songs “True Colors” and “Nothing Left To Say”, and on the pure strength of those tracks (which combined anthemic scope with jarring Metallic elegance to perfection) were immediately singed by Century Media!

So, concentrating on writing songs which are catchy rather than technical, the band has actually amplified its sound where heaviness and effective melodies are concerned, and in that mindset they recorded the 13 tracks on the album with producer Steve Everett (known from past collaborations with The Dillinger Escape Plan and Sepultura, among others) in an undisclosed Southern California studio. For your introduction to the ESTK's new album (or the band, tout-court...as the case may be, you know, after all this was a first-timer for me too), the band has posted the first single “Infected” at (www.) facebook.com/eyessettokill, where you'll also find two older songs. For more, consult the album's page at one of your trusted online sales websites (Amazon, iTunes, what-have-you-not, etc...), who usually provide 30-second samples of all tracks. Note : for the recordings of the album, Alexia took care of all guitars herself!