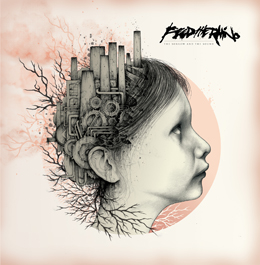 Feed The Rhino have long been damned with faint praise. They’ve consistently been refereed to as ‘ a great live band.’ Feed The Rhino are great live, in fact they’re among the best, but they’re more than a band who come into their own beneath some shaky lights and with a crowd of sweaty bodies ahead of them. Feed The Rhino are actually one of the finest underground rock bands in the UK just now. With ‘The Sorrow and The Sound’ they’re liable to convince everyone of that.

Feed The Rhino have always been associated with loud, obnoxious and thoroughly aggressive anthems. While ‘The Sorrow and The Sound’ remains true to that identity, it opens the band’s sound up revealing a more diverse range of influences than a casual listen might reveal.

This sense of texture isn’t without precedent for Feed The Rhino, their last album featured the brooding ‘Tides’, and it feels natural for Feed The Rhino. To the band’s credit, the quieter moments don’t feel out-of-place and serve to highlight how wonderfully heavy the rest of their material is.

To label Feed The Rhino as a ‘hardcore band or a punk ‘n’ roll band’ after this release would be unfair. ‘The Sorrow and The Sound’ is an album that reeks of sincerity, nothing here feels as if  its been written with genre boundaries in mind. The production also gives these tracks a pleasing sense of intimacy, as it’s obviously a well recorded album, but it isn’t difficult to imagine the band surrounding you and playing these songs when you close your eyes.

As enjoyable raucous, and occasionally melancholy, as these songs are it’s the that sense of honesty that really helps set this album apart. Vocalist’ Lee Tobin’ in particular is a large part of this, whether he’s screaming his lungs out, bellowing in ferocious triumph or crooning in a delicately intricate he always sounds singularly impassioned and when so much of ‘alternative’ music is so calculated that kind of thing can go a long way.

Feed the Rhino have proven that they’re capable of being unrelentingly aggressive, with this album they’ve proven there’s more to their cathartic bow that just rage. Feed The Rhino might be breaking the boundaries of originality, but they’re breaking their own boundaries and writing great songs in the process.

We’d be better off if more bands were doing that.