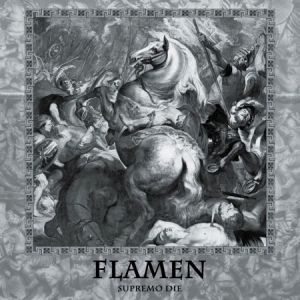 Flamen are a young outlet by Italian instrumentalist Bartlett Green, whom you might know from his co-operation with Warnungstraum especially. Bartlett wrote some material which he would record professionally, and since he was looking for a ‘singer’ that would vocally fit to his ideas, he contacted Aryan Art’s Alexander Ivanov. Alexander once co-operated with Warnungstraum, and both of them wanted to continue their mutual goal: presenting honest nineties-sounding Pagan Black Metal, the true stuff. FYI: in mean time Bartlett contributed with Aryan Art as well (on January 18th 2016 I uploaded a review for Aryan Art’s latest album Хармония - Вечност – Вселена, which included the assistance of Bartlett).

Supremo Die is the first (mini) album under the Flamen-banner (and as we speak, it’s still the only one as well), consisting of two lengthy compositions, and an in- and outro. It was released on CD, on cassette and on vinyl, and the artwork that accompanies the album is a fantastic expression of Martial Art!

The intro Sic Volvere Parcas is like a majestic martial symphony, full of bombast, expressing a post-apocalyptic spirit, and I do not think anyone would blame me for referring to Puissance or Arditi. Next comes the title track, and pretty soon the difference with Warnungstraum shows its (ugly and scarred) face: here welcome the dark manifestation of humanity’s richness (going for different definitions of it!) and the expressive, almost exclusive adoration of projects such as Graveland. Epic melodies, emotions of pride and melancholy, floating keyboards, high-tremolo-oriented riffs, quite a lot refers to Rob Darken’s main outfit. And you know, it isn’t but a personal opinion, and maybe I am not supposed to mention this, but this song might be the best thing Graveland could have done lately! Seriously, this piece is a fabulous Pagan hymn with so many levels that copulate with the definition ‘supreme’! there is so much variation in sound, performance and play, but the presentation is truly high-levelled; just take the acoustic intermezzo, for example, or the magisterial synth lines during the first half of this hymn… In essence, Rex Occultus continues the very same path, although I think that it sounds more Nordic in execution and atmosphere. Graveland might still be ‘present’ somewhere, but here Flamen do create a secret (sacred?) niche in between the heathen pride of Graveland and the likes (Berserk, Venedae, you know…) and the Viking-inspired persuasion (including the melancholic ‘heart’ that beats when you deeply go into the listening experience; and why should you not anyway) à la very early Enslaved, Satyricon, Massemord or Kampfar. Finally we have to deal with the outro Viae Solitariae, which is, unfortunately, not much but a simplistic acoustic interlude that does not deserve more attention.