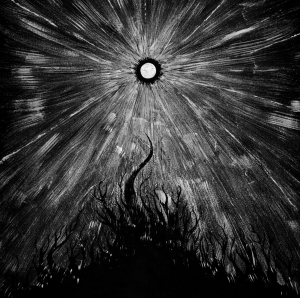 For some reason - do not ask me how - or when, where, whatever - I did not review Nur Ein Moment…, the predecessor of …In Stille. A pity, for this band deserves some (any) additional support and promotion. The same, evidently, goes for the label involved, Hypnotic Dirge Records (although, for this magnificent Saskatoon, Canada based label, I did several other reviews before, for this label deserves any additional attention whatsoever; but that is another story). Anyway, I have never been disappointed by Frigoris’ former releases, like Nur Ein Moment… (2016) or Wind (2013, also released via Hypnotic Dirge Records). And now these Germans have returned with their fourth full length in about twelve years of existence.

Frigoris were formed in 2007, but I have the impression that their early years were quite turbulent (line-up changes and so). So, founding member and vocalist / guitarist Dominik Winter permanently looked for a stable line-up to have his ideas translated into actual ‘songs’. To keep it short, line-up changes appeared, a couple of (great) albums appeared, and Frigoris never disappeared.

Enough about the past; what about this newest recording… Well, …In Stille is actually the last chapter in a conceptual (hi)story / trilogy, released once again via Hypnotic Dirge Records in an edition of 500 physical copies, digipack version (and digital ones, of course). The material was recorded in 2018 and clocks about sixty-five minutes (most songs last in between eight and ten minutes), and the fine cover artwork was done once again by Dominik’s wife Sara Wiedow, the general artwork by Hyems’ Dennis M. …In Stille was mixed by Waldgeflüster-spirit Jan ‘Winterherz’, and it got eventually mastered by Ereb Altor’s Jonas Lindström.

Continuing their characteristic approach, Frigoris bring very melancholic yet intense blackened Metal with lots of emotion in atmosphere and sound. Once again there is a huge variation in both structure and execution. Twin-led passages interfere with harsher outbursts, rhythmic chapters interact with acoustic interludes, introspective parts are nicely balanced to progressive ones, and Post-laden elements go well with pieces rooted in the tradition of this genre’s roots. …in a nutshell…

Every single composition is sort of divided into different chapters, organically canalised into one naturally sounding orchestration. The speed too, for example, varies a lot. From a general point of view, one might refer to that kind of stuff that might be labelled as Black Doom Metal, for the slower excerpts are like the spine of the whole sonic journey. Once in a while, those doomy parts trespass the (non-existent and futile) border with the funereal genre, and more than once even the DSBM scene might come to mind. At the other hand, the band often accelerates, with mid-tempo passages to quite fast and energetically intense ones. Especially when the general sound turns nastier (cf. some fragments in the monumental piece Funkenflug, to give an example), that up-tempo approach adds a certain lust for revenge on top of the melancholic, desperate attitude. Vengeance following pain, the law of a broken, tortured soul, let’s say…

Call it a fixed grid, yet each single epic comes with a comparable, yet at the same time distinctive, construction: an introduction, a reciprocity of faster and slower, heavier and more tranquil sections, a conclusion nicely referring to the next step in this story. That’s what makes this lengthy experience such absorbing, fascinating one. It’s like a movie that permanently arouses and discourages, provokes and appeases. A symphony of dualities, a whole concert of remarkable connected antitheses.

A surplus is the sound quality, for the production has been done with such craftsmanship and attention for detail. No matter whether it deals with a heavier or an acoustic excerpts, no matter if it’s a calmer yet then again a more overwhelming passage, the mix has always been executed with eye for detail, for equilibrium, for a fine-balanced elegance of all instruments (vocals included). None of them overpowers the other ones, none of them is subservient either. It is great to notice that not only the many tremolo and twin leads seek attention; the supportive rhythm guitars and rumbling bass lines are at least as important when referring to the strings. Remarkable too are the varied drum patterns, sometimes strengthening the melodic structure, then again taking a leading role for a while (like in Die Gleise An Denen Wir Starben II (…In Stille)).

And then I did not mention Dominik’s throat yet. His kind of screaming stands far away from hysteria – a way of ‘singing’ that often characterises this kind of atmo-melancho material. On the contrary, this voice is raspy and wretched, yet determined and combative at the same time. And not that unusual, for a couple of times, though quite sporadically as a matter of fact, there are some clean voices and choir chants too (by bassist Max (*) and guest vocalist Jan van Berkelom).

[(*) Maximilian Stiefermann, which is his full name, also performs some cello, which fits very well, evidently…]

Frigoris are such band that are able to assemble heaviness with integrity, grief with anger, smoothness with distortion, light with darkness. Within its specific genre, a highlight for sure!