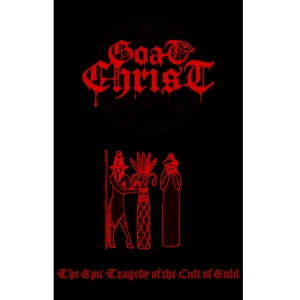 GoatChrist is the name for a very young outfit by a very young guy (born during the second half of the nineties) who calls himself Dominator Xul’Ahabra. This guy did perform or still performs under quite some other monikers in bands and solo-projects such as Rancid Entity, Lord Andras / Mundus or Mors Voluntaria a.o. With GoatChrist, he did release a handful of smaller recordings, amongst which The Epic Tragedy Of The Cult Of Enlil, which was digitally released in January 2015. One month later SixSixSix Music did put this material on CD, and in August there were two tape editions, one via Depressive Illusions Records and one through Locust Amber Records, the blackened sub-division of Legs Akimbo, the latter being limited to an edition of fifty copies only. Thanks to Neil to send me over this great recording!

Dominator Xul’Ahabra (vocals / guitars / bass / drums / percussion / ice bells + glockenspiel / Theremin / Mellotron / organ) started this project as some kind of manifestation for his philosophy about Evil-themed ‘left hand’ aspects (mind the ‘Xul’-part in his moniker). Initially the ritual occultism of Absu was a source of inspiration, although the likes of Revenge and Conqueror did pass by too.

The Epic Tragedy Of The Cult Of Enlil consists on an intro and an outro, and five ‘real’ songs that mainly last in between four and seven minutes (total length: almost half an hour). The intro (Introduction) is a fabulous piece of occult ritualism, mind-penetrating and breath-taking. Then come the five Black Metal pieces, which are fast and energetic in execution. The basics are a combination of an ultimately harsh rhythm section and quite melodious, somewhat thrashy riffing, which include quite some (not always that subtle) hints of the earlier Death Metal scene for sure. All this gets spiced by some fine tremolo leads at the one hand, but especially extremely grim, deep-throaty screams (besides some guttural grunts). GoatChrist lifts up its Aural Art to higher standards with some fabulous excerpts, such as the acoustic interlude in The Triumvirate’s Flight To Nippur or the horrific scenes in Plaguewood. But quite fine too are the different elements in each single track: tempo-changes, ambient excerpts, fiery solos, epic leads, or the occult lyrical themes.

Both play and sound are an expression of those ritual, magic and occult themes. The play indeed comes with quite some Absu-oriented details, as mentioned before, but the sound too, although not that fantastic actually (the mix lacks of that ‘little more’; for instance: isn’t is too dense and misty? Indeed it is), breathes that specific uncomfortable little undefinable thing that is quite distinctive from the average ‘rape burn kill’ band.