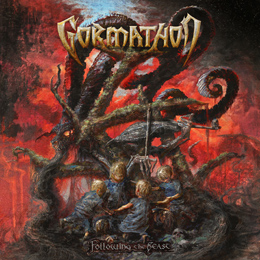 Following The Beast is the second full album from the Swedish warriors united under the banner of Gormathon, after 2010’s Lens Of Guardian (Supernova Records). There was also an EP in 2012, Celestial Warrior, by the way, and the songs from that mini-album are part of this full length too. Tony Sandberg (d), Stefan Jonsson (g), Tony Sunnhag (v), Markus Albertson (g), and Kalle Svedåker (b) recently recorded this forty seven minute-long epic that goes on in the vein of the former stuff. Following The Beast stands for very firm, somewhat dark, yet extremely catchy Dark / Groove / Thrash / Death / Doom-Death / Folk Metal with a very modern approach. The stuff is very melodious, with quite some variety in speed (the better part balancing in between slow and mid-tempo). The vocals interchange in between truly deep grunts and clean voices, which gives the whole a rather modern feel, although there are lots of other vocal feats too. The song structures then again are founded within the old school tradition, including classic riffing and a down-earthed rhythm section. Also the guitar solos are based on tradition, though crafted performed for sure.