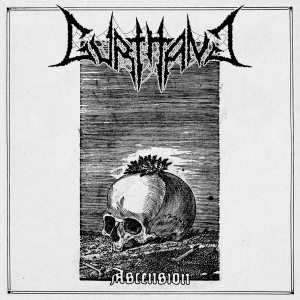 The Polish Black Metal scene might be (one of) the ‘richest’ from Eastern Europe, I think, so there might be an impressive amount of qualitatively high-standard bands dwelling around there too. And one of the top acts – at least, this is my personal opinion, for what it’s worth – is this one: Gurthang. In essence, it is the brainchild of one A.Z.V. aka Azathoth, whom you might know as well from, for example, Cosmic Despair, Beyond Life or Azathoth (defunct in the meantime). A.Z.V. started Gurthang almost a decade ago, initially as solo project, yet soon it became a ‘real’ outfit (with Norwegian assistance, by the way). The earliest years were very productive, with quite some recordings, amongst which a couple of splits (with the likes of, for example, Voin Grim (which actually is a project by Vojfrost, who nowadays is a permanent member in Gurthang), Moloch (indeed, thé Moloch) or some of his other projects. As from 2015, Gurthang became less productive, yet still the few releases were simply top-notch.

Finally, after more than two years and a half since their last album saw the darkness (i.e. Shattered Echoes, released in very early 2017 via Cimmerian Shade Recordings), Gurthang surprise us with their sixth full length, Ascension. The seven-tracker was written (music and lyrics) and co-produced by frontman (vocalist / guitarist) A.Z.V. especially, once again assisted by a fantastic selection of international musicians (Poland, Canada, Norway and Ukraine) (by the way: these guys work together with Gurthang for many years). Mix and mastering, for your information, were done by the band’s drummer Turenn at his Nomadic Sound Studio in Ontario, Canada. The main artwork and layout were created by Moornebheym, a close collaborator to the label involved, being Belgium’s finest Immortal Frost Productions. The latter did, FYI, release the band’s fourth full length in 2015, I Will Not Serve (for the [fabulous] review: follow this link: http://www.concreteweb.be/reviews/gurthang-0). The album gets released on compact disc in an edition of 500 copies (including an eight-page booklet) and, of course, via several digital platforms.

Six out of seven pieces on Ascension last in between six and twelve minutes (there’s one shorter piece included), having a total running time of almost one hour. And the album convinces as from the very beginning. Ascension opens with In Void Again, which has a remarkable epic touch of grandeur. Still you will hear that melodious character, creating that glorious sense of victory and vengeance. Striking are both the doomy and the mechanical approach. With the first I de refer to the tempo, which varies a lot. The better part is quite slow and enormously pounding, and it fits / hits. The short solo, for instance, at the beginning of the second half of this opening track shows the unique essence. But several excerpts – and this goes for the whole album, are pointedly faster. But whether an excerpt is slow or faster, everything has been performed with such energetic conviction and confident power. I also mentioned the ‘striking mechanical approach’. Especially the drum patterns create a specific feeling of semi-industrialised elegance. Like machine beats, most drum parts come with a bulldozer’ish force, constructing a vast, overwhelming web of indestructible massiveness. The slowest excerpts especially do carry that fine sound detail, yet this element for sure contributes to the heaviness. The fastest parts, at the other hand, are less ‘mechanical’ (and hey, this word is meant to be used in a positive manner), yet still maintaining that poisonous depravity of organic balance.

Ascension evinces the permanent evolution of Gurthang. Yes, the essence remains the same, compared to the past. The aim is to create a sonic darkness so asphyxiating, foggy, even mysterious, and this surely goes for this newest album again. A.Z.V.’s throat is like the messenger of retaliation, repulsion and grudge. The subtle use of atmospheric keyboards and acoustics strengthens the obscure character of the band’s message. And the huge variation (tempo and structures, yet I do refer to the addition of elements from other muSICKal genres too) gets maintained once more. Also worth mentioning is this Polish project’s ability to search for, and to find, a perfected balance in between the tradition of the Old School (i.e. the Second Wave magnificence) with a hint of modern craftsmanship. This goes for the song writing and execution especially, yet in some way too for the very dirty production. The latter is truly filthy, yet in a sublime manner quite well-balanced too. At the same time, the continuous evolution gets expressed by some striking facts. The overall heaviness is even more severe than before, for the tempo intensified, more than before. I mean, there are little more fierce outbursts compared to the former recordings. As said too, there is still that injection of Doom-related supremacy, but maybe more than before, this album comes with increased up-tempo rhythms. And another aspect that defines the progression of Gurthang is the murky atmosphere, finding inspiration in occult themes, leaving the somewhat (Morbid / Funeral / Doom) Death Metal-inspired aspects from the past behind.

In the vein of the former material, Ascension brings both complexity and atmosphere, and that is a fabulous characteristic courtesy of Gurthang. The ability to create and execute such wonderful equilibrium may not be that unique, but the height of the quality is exceptionally amazing. The complex structures are translated via the huge variation (see higher), yet the lack of exaggeration or over-production are noteworthy. And that atmosphere, another element that defines Gurthang’s raison d’être, is capturing. The advance is that a lengthy album with long tracks still remains attractive, lacking of boredom. And yeah, it’s addictive, for the listener surely craves for more. At least, I will push the ‘replay’ button once more, I think…