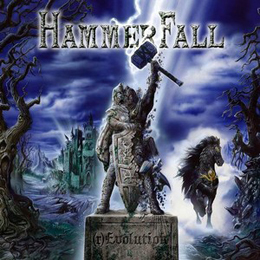 Hammerfall has had a steady and rather successful career; remaining one of the most consistent forerunners of the power metal scene. Twenty-one years and two hiatuses since their formation, (r)Evolution, the band’s ninth full length album, shows Hammerfall returning to their roots. Consistency was a part of strong part of Hammerfall’s repertoire until their last album, Infected, which saw the band completely shifting from their unwavering traditional power metal sound into darker territories via choppy song structures and plodding rhythms. Regardless of where fans and critics placed Infected, it seems that the band’s retreat into a different approach only lasted one album. For once, it seems that a record label has finally lauded a band’s return to form correctly, as (r)Evolution certainly sounds like an amalgamation of Hammerfall’s early albums

The album starts off in fine form, heralding back to the days of Glory to the Brave and Legacy of Kings, as “Hector’s Hymn” could sit side by side with longtime favorites such as “The Dragon Lies Bleeding” and “Stronger Than All”. Fast paced and rollicking, the palm muted riffs with trailing, ringing power chords combine with fast paced yet simplistic drumming, channeling Hammerfall’s glory days. “Origins” and “Wildfire” show more of that speedy spark and could certainly make the cut for Hammerfall’s future tour output. Everything that made Hammerfall’s early work so sickeningly sweet is here in fine form; from Joacim’s ultra clean, high pitched delivery, chunky palm muting and anthemic choruses bursting out the seams. That said, Joacim’s vocals are just as stellar as ever, sounding at his best since 2002′s Crimson Thunder. The extremely clean production, courtesy of Fredrik Nordström who worked with Hammerfall for the first time since Legacy of Kings, gives the album an authentic, late nineties feel.

Despite the few high energy, rollicking tracks, (r)Evolution contains a ton of middle of the road plodding. Not that it’s always a bad thing when Hammerfall does mid-paced power metal: Crimson Thunder was full of mid speed anthems and that album was top notch. “Evil Incarnate” seems to be the worst offender of a typical, mid-paced filler track, as the music trudges along not really going anywhere. “(r)Evolution” and “Bushido” prove that Hammerfall can still do interesting mid-paced songs, by grooving along and adding super catchy vocal hooks on the choruses, but not for an entire offering. In true Hammerfall form, the band decided to, once again, include a ballad, this time in the form of “Winter is Coming”, which really just takes up space and isn’t intriguing in the least bit. Then again, when have Hammerfall’s ballads ever been anything more than filler?

(r)Evolution certainly makes a strong attempt at rekindling those templar flames of old. The few stand out tracks here are solid and invoke a strong sense of nostalgia for the days of Glory of the Brave, but one’s enthusiasm needs to be curbed as there’s a good amount of filler mixed in. This may not be Hammerfall’s greatest album to date, but it’s a step back towards the right direction. Joacim’s vocals are the strongest they’ve been in years and the riffs are prime Hammerfall, oozing with that traditional power metal sound. This will certainly please fans of the older material, but just don’t expect this to completely knock your socks off. Cheesy lyrics, simplistic rocking power metal and Joacim’s trademark squeaky clean vocals won’t win over any new fans to Hammerfall’s crusade, but it’s their best in quite some time.