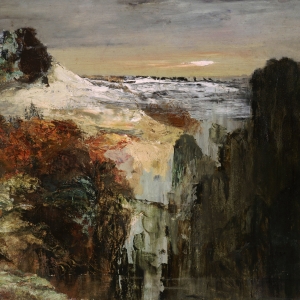 Guillaume Taliercio is known from his activities in bands like Cowards, Colossus Of Destiny and Eibon especially. The guy wrote some material during the first half of this decade, which did not exactly fit to one of the combos he is involved with, so he composed it as a personal project, which eventually got baptized as Heaume Mortal. He did it, and this isn’t but informative, under the name Guillaume Morlat, by the way. Together with his Cowards colleague and singer Julien Henri (ex-Sickbag) and drummer Jordan Bonnet, Guillaume (guitars, basses, synths) entered the Sainte Marthe studio with notorious knob wizard Francis Caste (think: Regarde Les Hommes Tomber, Hangman’s Chair, Necroblaspheme, Zuul FX, Cowards (indeed, they did work together several times before) and many others). The result is called Solstices, being a six-track album with one shorter and five lengthy compositions (amongst which a cover track – but I come back to this soon). Besides a self-managed digital edition, France’s finest Les Acteurs De L’Ombre Productions released the physical version, being a digipack release, which was printed in an edition of 500 copies.

Anyway… Solstices deals with, and this is taken from the biography, ‘the authentic, ageless and paradoxical hidden facets of life’. This sounds quite mysterious, and damn yeah, that’s exactly what Heaume Mortal are trying to achieve. This goes, evidently, for the sonic side of this experience too.

The most ‘mysterious’ thing when talking about the aural aspect is the fact that Heaume Mortal create an own musical universe, a unique spectrum of different angles and influences. In short, one can label this material as Doom-laden Post Black Metal, but that would detract from the truth. Solstices is more than ‘just’ Doom-laden Post Black Metal (pay attention, for there’s nothing wrong with that, evidently). The lead guitars and main melodies indeed remind me of a certain Post Black mentality, with that dissonant sound, those creepy riffs and the highly technical techniques used. For some reason, there’s even that epic, grim Nordic-oriented attitude going on. The rhythm and bass guitars and the drums drench the whole thing into a foul, mighty storm of Mega Sludge / Sludgecore, yet from a mostly freezing point of view. And then those vocals, grim, sulphuric, wretched, frustrated, malicious… Seen the mainly slow tempo, also Funeral / Morbid Doom Metal elements finds their way into the majestic and overwhelming play, but even with all these elements enumerated, you may not dissect the core of this recording.

It is all about two things, being the song writing / execution, and the atmosphere. I can be short about the first, for the former paragraph sort of refers to the extremely skilled song writing and the professional performance. As said, Guillaume wrote most of this stuff at the beginning of this decade (2011-2014) as a replenishment to his other acts. He wanted to translate his ideas into a new conceptual entity, giving an own twist to it. There might be a bit of his frenzy bass play comparable to Cowards, but for sure it is a wholly different thing going on in comparison to the other bands he’s involved with. Besides, both other musicians have been recruited with a careful focus on skills and their mutual organic ability to play together (as said, Julien is in Cowards too, and Jordan has been their live drummer since quite some time).

And about that atmosphere, well, it expresses those ‘hidden facets of life’, as mentioned in the second paragraph. And believe me: these facets aren’t the most beautiful ones. No, I am not going to spread and shout out any misanthropic propaganda, but human life is a sick thing. The whole atmosphere expresses the guilt, the disgust, the loss, the indifference. It’s a heavy atmosphere, almost suffocating, strongly negative and looking at the past for the future isn’t pretty. And therefor Heaume Mortal did a great thing to choose their specific cover track: Erblicket Die Töchter Des Firnaments. As you know, Burzum did not use to be the most positive and joyful project, so the choice isn’t that surprising. However, I am surprised by this specific cover version. Most of the time, bands try to replay a track quite similar to the original (always pretending they do it with their own identity), but in this case, it really is an own interpretation and not just a copy-paste thing. It’s raw, covered by corroded barbed wire, and deeply mesmerizing, despite the dingy performance.

Remarkable too is that this recording, after a mixture of Black / Post Black Metal, Post-Hardcore, Sludge and (Funeral) Doom, ends with a track that is totally different. Mestreguiral is rather to be considered an outro, based on eerie, gloomy synths especially. It is such an Arctic piece, desolate, negative, hypnotic, and simply suffocating. With not so much fantasy, Burzum might come to mind once more (and so are acts like Moloch and the likes). Besides, this trip gets injected by water drops, thunder, wind, you know, strengthening the haunting core.

Conclusion: …like a hybrid of elements from Blut Aus Nord, Deluge, Verdun, Celeste, Eyehategod and Cowards, if you want to…