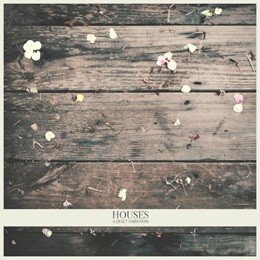 This band is composed of the married couple of Dexter Tortoriello and Megan Messina, and was started in 2010, after they had lived on the island of Papaikou (Hawaii) for a short period.

For three months, they lived without any of the modern comforts, worked during the daytime to gather their daily grub, growing indigenous micro-organisms, and using rain water for showers, cooking and drinking. Thus doin', they learned the hard lessons of what life is really about, and all of that became the inspiration for the duo's debut album All Night, which was released in 2010. the duo then moved to Los Angeles, signed a deal with Downtown Records, and started work on this, their sophomore album, which they recorded in late 2012.

The album must be seen as conceptual, telling the story of a man an woman whom lost each other after a nuclear holocaust and, before their inevitable death, try to get together again along California's Highway 10. Each song plays in a different abandoned house along that highway. The musicians actually made that trip once, and recorded audio and video in the abandoned houses which are featured in the album.

Stylistically, you can expect an almost Ambient album, with music which may vary a little from track to track. In one instance you may find a piano overlain with ethereal guitar play and sparse percussion, another track may have more lavish percussion and changing intensities of (acoustic) guitar with sparsely added electronically generated keyboard sounds, which occasionally sounds synthetic. Yet another track may be quietly played piano with sparse percussion, and but very little electronics. In essence, a very varied album...but a variety which one only discovers after repeated listening sessions, as the album is dominated by Tortoriello's somewhat uniform sounding melancholic style of singing (embellished by soft-whispered backings from Messina), which at first listen might get the casual listener to get bored. However, when one starts to get into the music, and the whole becomes more clear, one understands that this is in fact a musical work of beauty. By the way, one track (“the Bloom”) is purely instrumental, and I'm not sure whether there's actual (electric) guitar in that track, or whether all sounds were generated electronically....but it sure is a great Ambient sounding track!

There's a possibility to view the videos made for the songs “Beginnings” and “The Beauty Surrounds”, at the band's own website (www.) housesmusic.com (no material is available at the band's facebook page, nor at SoundCloud - find link at the band's site), but they can be counted among the album's more lively tracks, and are therefore not exactly representative for the album as a whole. For a more complete picure, go listen to the 30-second samples of the other songs, made available at your trusted online sales websites (Amazon, iTunes, …).