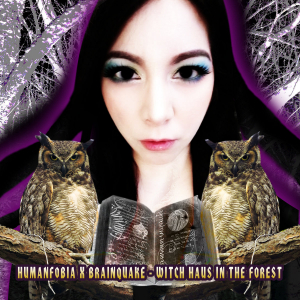 Witch Haus In The Forest is a collaborative effort by two international acts, i.e. one from Belgium and one from Chile. Marc Ceulemans aka Brainquake is a very productive Electronic / Noise / Experimental musician from Belgian soil, active since last century and responsible for numerous releases, amongst which different splits / collabs (with e.g. Brazilian Noise project Ferra-Reto [related to Nailed Nazarene Industries] or Italy’s HNW outfit Rapace). The other collaborator is Dreamcore / Witch House / Vaporwave project Humanfobia, even more productive than Brainquake, run by Sábila Orbe and in partnership with Mist Spectra. Humanfobia is closely related as well to labels like Internet Daemon, New Age Vapor Witch, Witch Spectra, Cian Orbe (rip) etc., and also involved with e.g. Filmy Ghost and Yaka-anima (on hold at this very moment).

In any case, both of them did find the time to work together actively for a first time (there is sort of a collaborative thing going on, for Brainquake did release some material before on compilations for e.g. the Internet Daemon label), which did result in the seven-titled EP Witch Haus In The Forest. Brainquake did create the basic structures and Humanfobia did mix it in a very eccentric way. That mix gets done with quite basic software, dixit Sábila, without mastering involved at the end. That’s cool, for the result sounds more organic that way, despite the electronic execution of the whole.

This EP, which has a total running time of about twenty-six minutes, is a digital release (no idea whether a physical edition will be available in the future), downloadable via different sources (links below), and it comes with fine cover artwork that (partly) refers to the recording’s concept. At the one hand, you have the cover model Mist Spectra, who appears on many (most) of Sábila’s recordings (and many compilations within the genre), but the owls and an ancient-looking manuscript-like book refer to the EP’s theme. That concept deals with middle-aged ceremonial rites and occult rituals, sorcery and magic.

All tracks on this EP do differ from each-other, seen from structural point of view / listen, but they are, in an organic way, very same-minded too. The core is created around gloomy, somewhat dreamlike melodies and mesmerizing electronics, enriched by eccentric and eclectic beats and disturbing samples / voices. It finds its inspirational sources in genres like Witch House, Vaporwave, IDM, Dungeon Synth, EBM, (Dark) Ambient, Horror Wave, you know, yet with a very specific execution. As a specific subgenre, it’s called Crypt Hop, for its uniqueness finds its origin in the mix of different angles. But it goes even further, for the individual pieces on Witch Haus In The Forest get injected by elements from surreal and abstract sources too.

The contrasts and dissonances create a bizarre yet intriguing atmosphere. At the one hand, you have the balance in between electronic experimentalism versus the floating melody lines, interspersed by those discordant samples and noises. Another contrarian yet somehow elegant fact is the equilibrium in between the ponderous, murky mood in equilibrium with an enlightening and manifest identity, showing revelation and insight. COV3N In The Crypt is a perfect example of these contrasts and, at the same time, well-balanced interplay, with spooky melody-lines and haunting principles from different angles. The witchy performance has a gothic attitude, which goes well with the ominous and obscure concept.

This EP is not an ‘easy-listening’ effort, yet the result is promising. However, going through this asks for several listens, but each time the listener will discover hidden details and designing peculiarities.