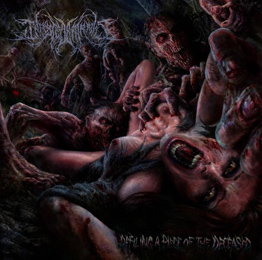 Grindhead Records have proven before to have a good nose for signing pretty nasty and ugly combos (evidently often from Australian soil). Recently they teamed up with young Australian five-piece Infested Entrails (now with a new bass player). Shortly after they were formed, Infested Entrails recorded and released an EP, and Defiling A Piece Of The Deceased is their debut full length studio recording. This album clocks just over half an hour and has some of the EP-tracks being recorded again.

Titles like Raped By A Zombie, Recreational Vomit Facial (from the EP), Pregnant With Parasites, Born With A Barbed Wire Cock, Raping The Stillborn and so on might give you an idea of this band’s sonic creations. Though it’s not Goregrind, yet slightly technical, Grind-injected Death Metal these pretty boys offer the listener. Opener Raped By A Zombie uncovers quite some Dying Fetus-alike worship, but Infested Entrails are not just another Dying Fetus-clone. No, they are not original, they do not renew the scene, for growler / screamer A.J. Herbert, drummer Matthew Budge, guitar players Matt Flame and Lyndon Southwell, and bassist Andrew Sheills are clearly inspired by both the North-American as well as the European scene. But they know how to combine all the necessary ingredients to turn their aural torment into some kind of own-faced tradition. It is both Brutal Death Metal as well as metallic Grindcore what you get, with quite some technical pieces, a great variety in speed, and above all, a massive, monstrous sound quality: dense and skull-hammering, yet decently produced and well-balanced in mix.