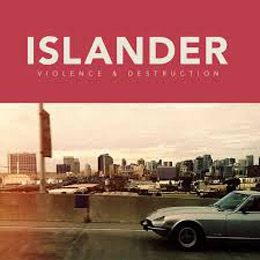 Although Greenville (South Carolina) based Post-Hardcore outfit Islander has only been around since 2011, its members (singer Mikey Carvajal, guitarist Andrew Murphy, bassist Chris Doot, and drummer Eric Frazier) have been playing together since 2006. Admittedly, the guys broke up for a few years, but in 2011, purely out of love of being in a band, they got back together as Islander!

With hard-working ethics, and music (an Alternative Metal and Rap Metal hybrid with a Nu Metal sound featuring the subsets of Alternative Rock, Hard Rock and Post-Hardcore) which shows similarities to that of Deftones, Glassjaw, Korn, Limp Bizkit, Mudvayne, P.O.D., and Rage Against The Machine (Carjaval's voice already having been likened to that of Chico Moreno, Zach de la Rocha, Sonny Sandoval, Chad Gray, Fred Durst, Jonathan Davis, and Daryl Palumbo in the past), the band soon made itself a positive live reputation pretty soon, end eventually signed to Victory Records in September 2013 (info re-written from the band's page at Wikipedia, because it perfectly fit what I heard). By then, the guys had already earned themselves the respect from several greats in the American music world, with Sonny Sandoval (P.O.D.) and H.R. (of Bad Brains) speaking out their thoughts about the fresh wind Islander was bringing into the scene at the occasion of the release of the band's debut EP Pains, on October 1st, 2013. The EP was well-received by both press and fans, and the material was brought to a larger audience through a tour with label-mates Close Your Eyes, which gained the band even more accolades for their refreshing live set and performances. Along the way, both Alternative Press, Big Cheese Magazine and Revolver Magazine put the band in their lists of bands to look out for in 2014!

All the while, the band had been laying the finishing touch on a set of songs they already had under their hat, and wrote a couple of new ones on the way to the studio with producer Cameron Webb (whom you might know from having worked with the likes of Alkaline Trio, Silverstein, and many more). The album hit the record store shelves just in time to coincide with the band's summer-long participation to the Rockstar Energy Drink Mayhem Festival (which also included label mates Emmure, Ill Niño and Wretched), and it's leading single for the song “Coconut Dracula” has been a successful rock radio hit, reaching a #23 position in the Billboard Mainstream Rock chart. Following the Summer festival tour, the guys continued their live promotion of the album through tours with Otherwise, Nonpoint, and Pop Evil.

With the band's musical style already mentioned earlier, I'll just add that quite a few of their songs indeed have a rich “Rock” sensibility, and the vocal stylings (mostly relatively clear, with an occasional more aggressive touch, and frequent harmonic backings) should allow quite a broad audience to start liking the offering, as the sing-along factor of the material is relatively high! For some listening, check out the “BandPage” section at band's facebook page, (www.) facebook.com/weareislander (includes official video for the EP's “New Colors” and “Lucky Rabbit” - the latter featuring a vocal collaboration by Bad Brain's H.R.; plus two songs off the full-length (including, of course, the aforementioned “Coconut Dracula”).

By all means, consider this band when trying to put together your list of favourite albums for the year 2014!