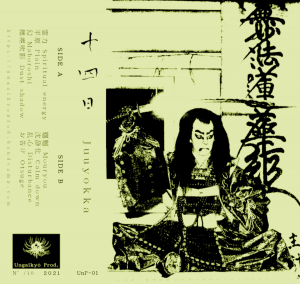 The respectable Julien Lacroix is the mastermind behind the fabulous outfit Moloch Conspiracy, but he’s involved with other projects too. Apparently this guy is hugely passionate by the Japanese history and culture (which also includes music, evidently) throughout the centuries, as well as rather modern themes from Japan, like their video games and movies. This did result in some intriguing new experiments, i.e. the start of a new label (which I will come back to immediately) and the formation of (at least) three aural projects: Goryō, Ungaikyō and Juuyokka. I will write something for the three of them (or better: this review deals with a recording by Juuyokka; for Goryō and Ungaikyō a review will follow soon).

Juuyokka is, as said, a new outfit by Monsieur Lacroix, and it means something like ‘fourteenth day’ or so. Translation sites do confuse sometimes. At least, it has a poetic meaning, referring to a full moon night on the fourteenth day of the month. And if you don’t believe this, I’ll fool you with another explanation. No, seriously, ‘fourteenth’ seems to be quite close to the in-depth definition, even though the use of this specific terminology is very rare. Julien did study and investigate the ancient sources, in order to achieve a good vision on the content of (ancient) Japanese Folklore / Music (including kabuki-theater); even the traditional instruments, that are quite specific, have been an object of study, both theoretically as well as in practice, and so is the way of creating and performing that typifying kind of Aural Art.

As Juuyokka, Julien recorded a first thing, entitled 十四日. Google Translate pretends to learn me that it is Chinese, written with our Latin writing as ‘shisi ri’, and also meaning ‘fourteenth’. You see, the connection is clear; I’m just not that trusted with Oriental tongues in general and the Japanese language more specific (except for sashimi and sushi, kamikaze and hara-kiri, saké or seishu, and that’s about it…), but it makes sense. Julien wrote and performed everything (some samples excepted – see further), and he took care of both mix and mastering himself as well.

十四日 is the first release on the newly established label Ungaikyō Prod., also run by Julien Lacroix. The label will focus on Music inspired by Japanese culture. There were two cassette versions, but these ones were so extremely limited (ten copies and that’s it) that it is kind of logical that they are sold out. But the label also offers a digitally downloadable opportunity. The characteristic artwork says a lot, by the way.

This recording consists of eight titles and clocks just over half an hour. It deals with memories from a distant past, the scars of ancient battles and visions of dead warriors. It’s Mother Nature that helps to heal the wounds of the conscious, to strengthen the spirit. Anyway, the tracks are created by two main instruments and some additional others), being synths and the traditional koto. A koto is some kind of zither-alike string-instrument, quite recognizable when thinking about far-Oriental traditional music. The combination of both is remarkable, but it works. The koto brings that touch of folkloristic finesse, somehow uplifting and hopeful, and it adds a modest yet vivid level of dynamism. This stands in full contrast with the keyboard lines, which are gloomy and dim, then again hypnotic and almost meditative in essence. Those long-stretched waves of synth-work and the remarkable koto-based melodies (even though ‘melody’ might confuse, for it often results in a dissonant and disharmonious thing) are canalized into the ‘spine’ of this exotic adventure, but they get permanently enriched by other (traditional) instruments too: different kinds of flutes (I think?) and a whole register of percussions and drums. Furthermore Juuyokka make use, quite subtly yet of undeniable importance, of noises and samples. Those samples are self-found field recordings from different sources (especially Mater Terra-related, like wind and singing birds), but some samples are (vocal) excerpts from a movie, Tōkaidō Yotsuya Kaidan. The latter is based on a very ‘popular’ Japanese fictional story, a tale of love and deceit, murder / suicide and ghostly revenge (by a so-called yūrei-entity). It was initially written as kabuki-play (sort of dance-theater) and it has been filmed many times (with, as said, samples taken from one specific film adaptation, which is, I think, the 1959 adaptation). But the content of that captivating old tale, well, that’s something you will have to explore more deeply yourself.

Anyway, the sonic result of this album is minimalistic but, at the same time, quite adventurous. The use of the koto isn’t that evident, and one must get used to experience this; but it works. 十四日 turns out to be a sinister and unusual work of darkened ambience, a mixture of Japanese Folklore, Dark Ambient and (hints of) Dungeon Synth. But actually, this is a unique approach and it needs / deserves its own stylistic description, like ‘Kabuki Synth’ or ‘Nippon Ambient’…