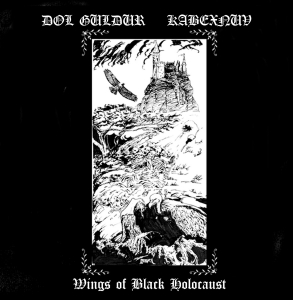 When I noticed that Bud Metal were about to release a new album, I was extremely aroused, of course. I was (and still am) quite enthusiastic about Avitas, an outfit by label-owner Myrtroen, and since I found out that one of both projects appearing on this split-album would be another solo-outfit of this guy…

Under the working title of Wings Of Black Holocaust, Kabexnuv joined forces with another one-man army, Dol Guldur. I hadn’t heard of them before, but that’s nothing to be ashamed for, apparently. And we will hear about them in the future.

Anyway, Wings Of Black Holocaust opens with six tracks by Kabexnuv, another outlet by Patrick ‘Myrtroen’ Mytron, the guy behind Avitas. The project’s moniker is named after Qebehsenuef, one of the four sons of Horus (and then we’re entering the ancient Egypt mythology). It was the hawk-headed one, representing the (North-) West. Like the three other sons, his existence was quite important for their vision on physical afterlife, i.e. that the viscera had to be conserved etc. This specific son was the symbolization of the intestines, but we’re not in some history lessons right now. Amateurs of (Egypt) mythology will (have to) search for more info, but that’s not my task.

So, Kabexnuv (indeed from the western lands of Canada) are represented on this split with two new songs and the four pieces from the demo, being remixed for this release especially. The lyrics, and that’s not exactly a difference with Avitas, deal with occult, thelemic, ritual themes, based on the works of e.g. Crowley and Blavatsky. But musically, Myrtroen sort of wanted ‘to write in a trance format’, performing the organic and improvisational way in order to channel the purest essence of Black Metal. And that is another approach in comparison to this guy’s main project, noticeable within the final result of the material.

Kabexnuv create a down-tuned, trance-like form of ultimately grim and obscure Black Metal, modestly differing from the primal, thrashy approach Avitas is known for. The tempo varies quite a lot, with both slow and speed-up moments, and pretty much everything in between. As a matter of fact, the material sounds quite psychedelic, and then I am not (at all!) referring to some seventies-oriented acid-laden form of mushroom-psychedelica, yet rather the occult, alchemic and magic side of mind-transcending frenzy. It goes for the hypnotic leads, the ritual drum patterns, the echoing, distant screams, the pushing-forward rhythms and the contrasting bass lines, yet also for the additional and diverse injections, such as the outro on Goat Of Mendes (Invoke The Baphomet). It is remarkable how cohesive all those pieces do sound, and both older and new material give me a specific, difficult definable feeling of discomfort and, at the same time, devotion. Once again, at least from aural-composing point of view, Myrtroen does please undersigned’s ear drums! Besides, the average length is pretty extended, but this too strengthens the craftsmanship and persuasion of the artist for this project.

The production however, done by Myrtroen himself, lacks of overwhelming power, and that’s a pity. The mix is way too delicate, hollow and empty (I hate it to miss that equilibrium in between the different sonic aspects), and this derogates the possible intensity too profoundly. I do not mind that much, but it isn’t but honorable and modest to mention this objective fact.

Dol Guldur are a Brazilian one-man outfit by Nazgul Grim, named after the mighty castle of Sauron in Tolkien’s epic writings. But you did know that, evidently… They appear on the CD-version only, and not on the digital release, for Dol Guldur want to stay free from the world of digitalisation as for now.

What this guy brings under the Dol Guldur-banner is a mostly grim, raw and evil form of pretty Traditional Black Metal, heavily rooted in the Nineties culture. The compositions are of the classic kind, with the trusted elements: melodic riffs and leads, a heavy rhythm section and guttural screams. But this does not mean that there is a certain lack of fascination – though the ‘necessary’ acoustic guitars appear too from time to time. Further on there is the evident variation in speed, with both fast to blasting parts at the one hand, and slow-paced, down-tuned ones at the other.

I am pretty sure that the sound quality, which isn’t that ideal (‘underground’, you see…), in combination with the lack of being ‘renewing’, will irritate some listeners. In that case of irritation, you better just ignore this sonic expression of the underworlds, and continue being pathetic and narrow-minded. If you can see ‘through’ the surface however, you’ll notice lots of fine elements, like the convinced performance, the honesty that pays tribute to the Old School, and the fabulous sphere.

This material is strictly limited on CD to an edition of, if I’m not mistaken, 100 copies. The Kabexnuv-compositions are to be found the digital way too; Dol Guldur’s ones are, as mentioned before, not on the net! Hawk and vulture united to spread the message of misanthropy, evilness and the nihilism of human existence, that’s the message Wings Of Black Holocaust spreads. There’s no escape, there’s no mercy! …just respect from undersigned… 86,66/100!