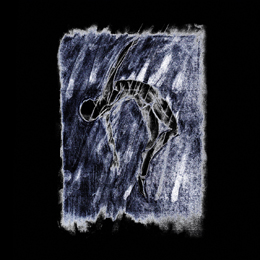 It isn’t that strange anymore to sing in the mother tongue. French, Slavic languages, German, Scandinavian and so on; almost each single country houses bands or projects that do not use English as lyrical source of expression, yet their very own tongue. This goes as well for the Dutch language. In both the Netherlands and Flanders (the Northern part of Belgium), the Dutch speak gets used within the texts. This also goes for the new act Laster (it means ‘defamation’, ‘calumny’, ‘vilification’). This act from the Netherlands debuts on Dunkelheit Produktionen (German for ‘darkness productions’ – damn, I look like some translation robot) with De Verste Verte Is Hier (‘the farthest distance is here’), a four-tracker (pretty length, with three of those songs lasting for over ten minutes) to celebrate the desolation of our planet.

The album brings a highly melodious and atmospheric form of DSBM (‘Depressive Suicidal Black Metal’), yet not of the most desperate and self-mutilating kind. It’s pretty fast in general (with a lot of differentiation in speed, yet seen the length of the compositions, it isn’t that bizarre) and full of hate and disgust. There is quite some influence from the Nordic Second Wave, at least when it comes to the uncompromising rawness and suffocating grimness, as well when talking about the production. The latter is unpolished, somewhat scuffy and primitive. For the better part it is the right approach, but (even) I think that the result could have been little more impressive if the general sound was less misty and muddy, and little more refined. But it does not bother me that much. Ulterior, it is nice to experience quite some variation in speed (as mentioned above) and structure. Sometimes I am disposed to refer to the Norwegian scene, then again to the French or Canadian (both the Quebecois and Cascadian) one, or the Finnish scene, and so on. Yes, it does mean a lack of originality, but with a couple of self-developed elements (like the in- and outros, gluing the individual pieces together, and the intermezzos, as well as the few keyboard lines, the choir chants, a. o.). Oh yes, the vocals are of the conjuring kind, if you know what I mean, and that too fits perfectly to this kind of bleakness. Oh yes, the title track, which lasts for six minutes only, is little different, by being more catching, more Post-Metal / Shoegaze / Cold Wave-oriented, and less malignant… It’s strange, I think, but I can understand the cohesive direction within this whole concept.