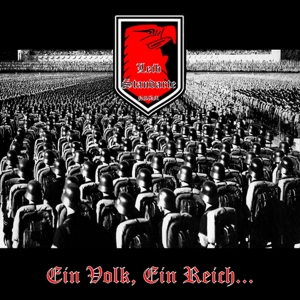 Lyon is a very old French city (founded by the Romans more than two millennia ago), at the feet of the Alpes, and not that far away from the Swiss border. The city has a beautiful centre, several acceptable wine houses (it’s there where Rhône and Saone ‘melt’ together), and it houses the head office of Interpol. Lyon also is home to LeibStandarte (not the Greek one), a young formation that recorded and independently released a very limited three-track demo in 2017. FYI: the tracks from that demonstrational recording return on their debut. Throughout 2017, the band (in extension: guitar players Scharführer Willelm Krüger and Obergruppenführer K. Wagner (the latter also performed the drum parts), vocalist / lyricist (French and Deutsch) Standartenführer Klaus B., and bassist Oberführer G. Granate – all musicians active within the French scene, but anonymously performing to avoid being penalised by their national-socialistic and neo-fascist ideology) recorded its debut at the Das Werwolfslager Studio, and the result, Ein Volk, Ein Reich…, is a seven-tracker that lasts for thirty-three minutes.

The CD edition, limited to five hundred copies, gets released via the fabulous Hass Weg Productions label. It comes with a four-page booklet, which shows the band’s conceptual approach though the pictures, symbols, slogans and logo. But actually, if you paid attention to the members’ monikers (see former paragraph) or the album’s title, you might have an idea about their philosophy, I guess. Indeed, LeibStandarte are like warriors from the right-winged Pagan Horde. Via this site, I do not focus on political, racial, religious or cultural issues, but from a purely objective point of view, please welcome Ein Volk, Ein Reich…

The album opens with the short introduction Fanfare, which starts with a glorious nation’s hymn, followed by a thankful crowd (smiley with a Prussian helmet included), before turning into a very cold and oppressive Dark-Synth melody with excellent martial drum patterns and a sample from some speech (no idea, actually, who’s the voice proclaiming ‘Sieg Heil’!). Then, as from the title track, well, heil! LeibStandarte perform that kind of Black Metal that simply goes back to the essence. Black Metal as it was supposed to be in its origin, is supposed to be misanthropic, blaspheme, hateful, and elitist! Ein Volk, Ein Reich, Ein Führer, Blut Und Ehre translates it into a contemporary sonic definition. This first track, and it goes for all other too, combines magisterial (and I mean truly fabulous, magnificent, magisterial) Pagan-oriented melodic guitar lines as guideline, with a monumental, powerful rhythm section to support, and strengthen, the leads. Those guitars melodies are almost hypnotising, glorious and victorious in essence, and that rhythm section consists of fine-tuned bass lines and heavily pounding drum patterns. Besides, Klaus’s deep gurgling throat is of a mostly hateful and malignant timbre, invigorating the band’s peaceful message. As said, this goes for the better part of the album. There is a fine variation in speed, with a focus on energetic, up-tempo structures, and with quite some slower passages as well. But in every single case, the vile atmosphere and the melodious execution remain like a basic and essential characteristic throughout the whole album. Another returning, yet mostly important aspect, are the several samples, mainly takes from speeches and paroles from the glory years of the Third Reich. As intro or outro, as intermezzo, or subtly hidden within a track, these vocal recordings (as well as some Folk anthems from that era) from an era of European (and worldwide) identification (what a diplomatic way to give a description on the matter) are of main importance, and it does fit to the hymns for sure! It strengthens the message of LeibStandarte and their vision.

Anyway, LeibStandarte perform an extremely ‘lovely’ form of NSBM, and to my opinion they equal the superb level of many colleagues from, let’s say, Poland, Greece, Germany, Russia, Canada, Botswana if you want to. My sole remark might be the dull, muddy sound quality. The mix is okay – you won’t hear me complaining about that – with the bass lines, for example, being hearable for sure. But the production itself is quite chaotic. I miss some finesse within the sound, which would have lifted the total experience towards a more elegant orgiastic satisfaction. But it isn’t but a minor detail, and the sound does not really bother me that much.

So, in conclusion, I can express a certain respect for this band’s bravery, yet especially for their nicely skilled song writing capacities and performing abilities. Ein Volk, Ein Reich…, whether you like it or not, is a convinced tribute to the supremacy of the Third Reich and its advanced army, and this band is like devoted soldiers paying honour to one specific philosophy / vision, via convincedly written and well-played NSBM anthems. Heil!