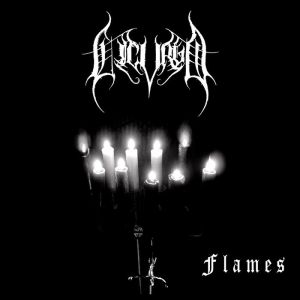 Vacula Productions did surprise me a lot last year and this year with quite some hands full of fine releases, such as Grimwald, Aeons Ov Frost, Nyx, Northern Tod or (evidently) Emptiness Soul, amongst many others. Just click on the label’s name on top of this review to check out some other reviews undersigned did for this Ukrainian label. Another fine release, though released a year ago (but that does not matter, does it), is from the Spanish band Licurgo, formed one decade ago. There was one album before, I guess, the self-released full length Strongest, and now this outfit around guitar player / vocalist Redacrem returns with Flames, which has a total running time of almost fifty minutes.

First this. The band’s name (what will follow is something I ‘stole’ from the .net, but it might interest you) sort of ‘reflects the spirit […]’ and it was inspired by the legendary Greek human being Lycurgus, ‘a famous thinker that provided the citizens of Sparta with a strict code of conduct in order to strengthen them’. ‘The band takes some of these Spartan ideas about collectivism and adds the individualist thinking of F.W. Nietzsche, the Satanism of A.S. LaVey and the reflections of Aleister Crowley. In addition to this, the mentioned ideas are surrounded by an aura of misanthropy and fight against monotheistic religions, which have been brainwashing a big part of mankind, as well as a sense of exaltation for the rich Pagan Western past, together with a touch of magic and dark fantasy’. Is it some kind of reflection of Licurgo musical approach too?

With two new members (studio only???), Redacrem created two hands full of songs that were recorded, mixed and mastered at the Alicante-based Black Stage Studio during spring and summer 2014 with Luis Varo behind the knob-panel.

Flames stands for a collection of timelessly sounding Black hymns from a highly melodic and epic kind, yet quite some variation in tempo and structure. When coming back to that speed, well, about every single piece on this album relies in between furiously fast eruptions of utter brutality and violence at the one hand, and slower passages of doomish misanthropy at the other. With the variety in structure I am rather referring to the timeless execution of the album, being strongly old styled yet with undeniably prominent progressive details too. Also the injection of rhythmic and deadly passages, as well as some hellhammerish influences, are part if this structural definition. Pretty important, I guess, is this. Licurgo certainly dwell within spheres of the Second Wave trend – there’s no doubt about it. But in contradiction to many colleagues, they do not focus on the tradition from the Scandinavian scene (especially the Norwegian and Swedish ones), but rather on some trans-European interpretation, with countries like Greece, Germany, Finland, Switzerland and Spain (evidently) coming to mind especially. The lack of originality gets counterbalanced by strong song writing and, in report, an excellent performance, including a cool sound quality (which holds the middle in between clean passages and rough-edged rawness). Another counterbalancing detail is the prominent and inherent traditional approach that gets interspersed, from time to time, with post-modernistic structures (cf. a piece like Salve Satan a.o.).