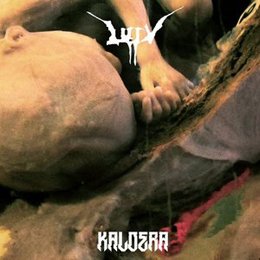 I guess it's a fair assumption to state that any artist is into what he does for the appreciation he might get, and generally speaking you'll find 'em pleased to be tagged a certain way, being categorized as belonging to a certain genre or sub-genre. I mean, it's quite “human nature” to “belong” (or appeal) to a certain group of people, right? History however, has shown us that sóme individuals will walk another road, developing artistic styles outside the “norm”...individuals which later gain followers, and which are then seen as pioneers! That statement certainly counts for the art form known as “making music”: on the one side you have the followers, who often express their appreciation of a certain genre or sub-genre in quite appropriate (nay, make that “creative”) ways, and on the other hand you have those who will try out new things...and therefore dislike any tag being put onto themselves...

One such band is the Tampere based quartet Lurk. Formed in 2008, the band's current line-up includes original members Kimmo Koskinen (vocals; also of Cultic Jones Crew, and formerly of Ravening), A. Pulkkinen (guitars, synthesizer & backing vocals) and K. Nurmi (drums), with E. Nurmi taking over from the original bassist in 2012. 2012 also being the year in which the Fins released their self-titled debut album (on CD through Totalrust, and on LP through Svart Records). The album enabled the band to play multiple shows in and around Tampere, and in the rest of Finland, and in the process the band's sound (so stated by the band itself) evolved into something even more complex. Venturing in slowed-down Extreme Metal with a dark mood, I guess it's safe to state that these Fins deal in a Progressive Doom-Sludge, but not without stressing that the “Progressive” part of the equation should also be seen in its original description of experimentation, and nót only in the just be restricted to the idea of making use of progressive melodies (which, of course, the band also does!). If indeed the debut album incited some reviewers to compare Lurk with Crowbar being played at half the speed, or with the depressing mumblings of Zatokrev, I guess this time around those comparisons won't quite hold...as the sum of things is more than the equation suggests!

As stated, the guitarist also handles synthesizer. Well, I dunno how in live conditions he would handle those while at the same time evoking the sound of saxophone (album opener “Below Flesh” - I very much suspect it's a real sax being played here anyway) or strings (opening & latter part of “6 Feet, 6 Years”), but those are really things of minor importance (of course, the band might always call a befriended musician onto the stage to do those parts, or to play those sparse string parts on the synth). To enter Lurk's luridly dark world, surf to (http://) lurk666.bandcamp.com, where you can listen to 2 songs off the debut album, and 3 off the new one...none of which mentioned above, so you'll find the band in a more “regular” state. Still, you'll have to admit, these guys play a mean melody, effective and catchy in the extreme! The singer may not have a wide range, but as topping of the music, he performs quite fittingly and more than admirably well...and with a certain diversity anyway! Ooh...one weird thing though: why are these guys now on a Czech label, and not on one of their own country? Probably better conditions, because the labels in Finland usually recognize quality music quite well!

Yeah, undeniably...great stuff, and therefore more than deserving to get a rating warranting a nomination for inclusion of my 2014 year-lists!