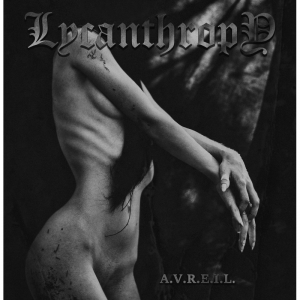 It took some time, it has been too long, way too long, but finally, after more than two years, LycanthropY return with a new epos, called A.V.R.E.I.L. A.V.R.E.I.L. stands for ‘anno volcanii, rex efferorum, imperium lucis’, and means something like ‘year of the volcano, king of savages, empire of the light’. It’s the first release after Operation Werwolf (http://www.concreteweb.be/reviews/lycanthropy-0), which was released as well via Poland’s finest Lower Silesian Stronghold. Hail!

Frontman Furious (diabolic throat from Hell) and his companions Gunner (strings) and Oleg (drums) created another half an hour of sonic terror, divided into nine chapters. I have no information about studio or other session assistants, but then again: whatever. Let’s skip that stuff, and get penetrated brutally by A.V.R.E.I.L.

No intro whatsoever this time; A.V.R.E.I.L. immediately gives presence to a militant fierceness. The album brings majestic, melodic-oriented and highly energetic Black Metal with a nasty twist of misanthropy and hatred.

The opener Dark Triad Of Animal In Me, for example, is, for the better part, a fierce piece of unstoppable, war-mongering hate-propaganda, based on fine melodious structures, bashing drum salvos, raw and raspy vocals, and some other stuff, like a thrashing solo and hypnotic leads. The very last part is remarkably slower, and simply wonderful within its melodious performance. Quite different, then again, is the next piece, the very short track Porn Cunning Bastard, somewhat grooving and thrashing, dingy and sordid. It’s an enormous contrast with Self-Absorption, which is, as we sort of know it, atmospheric and melodic, with an epic and obscure atmosphere. The main structures are mid-tempo (to my opinion, there are more mid-tempo and even slower parts compared to any past release), yet the track gets interspersed with harsher, pernicious outburst. Not only the fantastic guitar melodies, the perverted vocals or the pushing bass lines are remarkable; what a drum patterns, what a unique percussion orgasm… With Sexual Sadism, the f*cked-off taking no prisoners mentality takes a new dimension of ugly squalor, yet it remains glorious and majestic. And so it goes on…

A.V.R.E.I.L. has a lot to offer, and must appeal to all fans of Lycanthropy’s former material. It’s sick and deranged, yet genial too to notice this fine equilibrium in between elegant melodic structures at the one hand, and the foul, dismal and frantic execution at the other hand. It is deadly, thrashing, delusive and profane, yet oh so grandiosely performed at the same time. Besides, the sound quality is very appropriate: raw and powerful, and still decent and well-balanced.