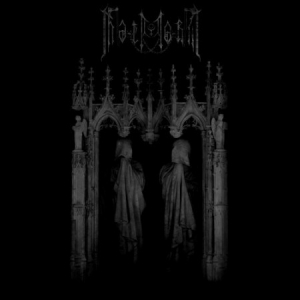 On March 28th 2016 I did publish a review for Malmort’s Vox In Excelso, this French band’s debut full length album for Hass Weg Productions. Via the very same label we can also experience the sophomore full length, Excerpta Funebris. Once again, the songs were recorded at the La Grôlle Studio (except for the drums). The lyrics (mainly written by vocalist Reicheran) are in French, with some Latin excerpts injected. Excerpta Funebris consists of seven compositions and the whole experience clocks fifty-two minutes (however: mind some minutes of total silence at the end). …objective information; now it’s time for my subjectivism!

Well, it’s quite simple to make this review, and to keep it short: Excerpta Funebris is top. You’re welcome…

No, this would be too easy, but actually I do not know what to say, what to add, where to start. I was not that disappointed in Vox In Excelso at all, but this album goes much further when it comes to song writing and performance. It’s quite the same elementary basics that are maintained right here. Malmort bring quite intense, powerful, melodious and varying Second Wave-oriented Black Metal with more than some hidden hints of the so-called ‘Nordic’ trend. Especially when experiencing the melodious and epic melody lines, the fierce outbursts, and damn, even the rough-edged yet well-thought sound quality, the trans-European scene from the Nineties (yeah, I just need to mention Norway, do I not?) revives in all its glory. The subtle ‘Post’-alike elements (cf. details [and I admit that in these cases my secret autistic inner-self takes over self-control] like the dissonant riffs in Le Mege De Second Ordre), without being modernistic, add that little distinctive, and the thrashing details, more than before, increase the intensity of this album. And that is sort of a constant on this album: being somewhat more persuasive, intense, powerful, vengeful and merciless than the former one. Despite having recorded this material in the same studio, the sound quality too did empower, did get nastier (without lacking the true core of the story: focusing on honest story-telling rather than losing itself in unstructured would-be nastiness).

It’s quite a challenge to describe each individual piece, for there is much more cohesion in between all pieces this time. There still is a huge amount of differentiating elements within each single composition (let’s not forget the many breaks, hooks and tempo-changes), but all compositions are quite exhaling the characteristic face of Malmort – an evolution that hails the identity of this band for sure! And still, although maintaining the typifying tradition of riffing and melodies, the band convinces with each single creation. Therefor I think that this new album is quite stronger than its predecessor. I even dare to say that the ‘emotional’ side has been worked out better (cf. the from-the-heart attitude in Le Gibet De Montfaucon, to name but a (quite clear) example). But I cannot but enclose this review without mention the closing track, La Grande Danse Macabre, which sort of unifies all elements within a quite convincing experience. The composition translates the core of Malmort, with all details that define their sonic, atmospheric, compositional elements. There’s so much to experience right here, if only focusing on the speed with all its variations, or on the spheres, with that perfected balance in between hateful malignancy and the soberness of misanthropy. Besides, it sort of leads us, after a couple of minutes of aural non-existence (also known as ‘silence’) to darkthronish highlights (Darkthrone for sure have always been a source of inspiration for Malmort), to an own interpretation of In The Shadow Of The Horns, and damn, this isn’t a bad cover track at all. Normally, especially when talking about ‘semi-gods’ like Darkthrone, a cover interpretation is, per definition, inferior to the original. Well, that is quite the same to right here, evidently, however, I have to say that this one comes close, very close, to the conviction, to the great atmosphere of the original version.