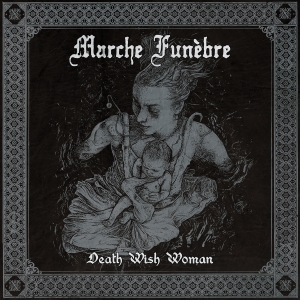 Everybody knows Carmina Burana by Karl Orff, and especially the O Fortuna fragment, for it has been used hundreds of times before as intro on a (demonstrational) recording or for a live gig. But one of the best-known classical pieces, and one of the most covered ones ever (also in other genres than Metal), more than the aforementioned piece, must be Marche Funèbre (aka The Funeral March) by Polish classical composer Fryderyk Franciszek Chopin aka Frédéric François Chopin (French name, for he lived in France for the better part of his life). For the happiness in the atmosphere, some friends from the region around Mechelen (in between Antwerp and Brussels) that wanted to play Doom, decided to call their new band after that inspirational song. So, in 2008, the band Marche Funèbre was born.

Throughout the years, the band (with quite a stable line-up, by the way), played a lot of gigs, and they released several highly appreciated albums, totally dedicated to the stripped-off roots of the traditional Doom-Death Metal scene. To celebrate their tenth year of ‘being around’, the quintet entered the famous Klangschmiede E Studio in January 2018 with nobody else but top-producer / engineer / mixer / master Markus Stock (also a talented musician in some truly interesting bands). On top of it, they decided to have the better part of their lyrics based on the Kahlil Gibran novel Broken Wings (with splendid artwork by Alex Norman, inspired by this novel) and to do a cover of one of their main influences and sources of inspiration (Paradise Lost; see further). Eventually, they signed to GrimmDistribution, part of the Satanath Records family, and in collaboration with Cimmerian Shade Recordings, the four-track EP Death Wish Woman got released in an edition of 500 copies on compact disc. There is also a tape-edition, and of course you can find this material via the known digital sources via the labels’ Bandcamp pages.

Death Wish Woman is an EP, yet it clocks almost half an hour. It consists of four tracks that go on in the vein of all older stuff. First piece is Broken Wings, which starts in a semi-acoustic way, soon turning into a monstrously heavy and oppressive thing. The atmosphere is dense, bleak and onerous, with that classical feeling of both sadness and anger, both melancholy and conviction. A couple of things a remarkably striking: the few obtrusive harsher excerpts (which are well-balance in combination with the slow-paced majority), the fierce solo, the wide variety vocal-wise, and the sound quality. I come back to the latter soon. The second piece, which is the title track, surprises immediately with its enormous energy and power, and that monumental yet ultimately blackened touch of misery. I am impressed by the bass lines, the huge force of drum patterns and guitar leads, and the vocal variety, with blackened screams, deep grunts and cleaner ‘sung’ vocals. A Departed Guest is much more ‘traditional’, mingling the roots of the scene (think everything in between My Dying Bride, Katatonia, Novembers Doom and the likes), and therefor a piece that comes the closest to the former works of Marche Funèbre. The woeful, even doleful, yet harsh, explicit lyrics (taken completely from the Broken Wings novel) are exceptionally perfectly defined by the sonic performance. And what a classy final part, so breath-taking and intense at once.

Besides the three new (and own) songs, this jubilee album brings the listener a cover track of Paradise Lost’s As I Die, from the Shades Of God album. It does sound like the original for sure, yet then again, Marche Funèbre add an own twist, with some subtle and some more distinct own-faced accents. Somehow, for some reason, this cover song fits to the EP, even though it does not follow the concept created through the first three compositions. Yet as bonus it is a fun thing to experience.

For some reason, the technical side of the guitar play did progress enormously, with an increased skilled performance. No, it is not ‘progressive’, yet more defiant than ever before. There is some more variation in general too, within tempo, song structure, execution and atmosphere. And then you have that professional sound result from the prominent Klangschmiede E Studio. The aural quality of Death Wish Woman is very high. Marcus Stock did, once again, a great job, being able to give this album a monstrous sound. Doom-Death needs that focus on the rhythm section so hard, for otherwise the leads / solos and voices would overpower the rest, and minimalize the whole background instrumentation. Here that’s not the case. Besides, the production is enormously ‘clean’. And you might know that I can’t stand a ‘clinically clean’ production in normal circumstances – and that’s still the case. Here, however, the decency overrules the artificial over-production, still injecting the whole with a certain rawness and grimness. Especially the backing strings, therefor, come into their own. And the lack of exaggeration too makes the powerful recording quality of a high level.