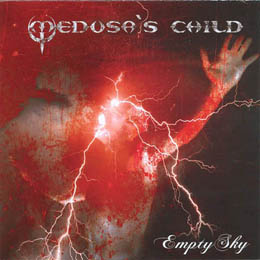 The 4th full length from these Swiss prog/power , for a band that’s been around  for 15 years that’s not  a lot and for me it’s the first  introduction to the band.  There was a time in the mid eighties and early nineties that this sort  melodic  prog/power metal was  the playground of  a limited number of bands from the USA .  Indeed  like FATES WARNING, LETHAL ,CRIMSON GLORY  early DREAM THEATER have set a standard back then which in my opinion is still not matched by  any of  prog power  metal albums released the last 10  years or so…. Sad but truth.  MEDUSA’S  CHILD  are no different, there is loads of  good will but what’s on offer simply does not grabs you by the balls the same way as the  originals did and still do… EMPTY SKY features  12 ( of which one –MY INNER VOICE- is featured in 2 different versions and none of them has  a hook or a chorus that sticks longer in the listeners mind  than the  actual length of the song… The band is not helped by the vocals of  a mr. CROW who simply does not have the skills nor the power to bring the songs to a higher level.