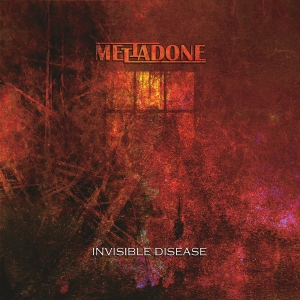 Mettadone are quite a new project by drummer Evgeniy Shamarin and singer Max Iliashenko, two Ukrainian guys who joined forces under this moniker in 2014. Evgeniy wrote some material around that period, and together with Max and several session musicians, they recorded a first album in the N.C. Records studio. Evgeniy himself took care of the production, and the lyrics were written by Katerina Gurieva, who also performs the female vocals on this first album. The result, called Invisible Disease, lasts for almost fifty minutes.

Invisible Disease brings some form of Dark / Gothic / Doom-Death Metal, but of a mostly atmospheric and symphonic kind. This specific scene, and then I am but talking about my own experience / preferences, has a limited amount of acceptable releases, quite some stuff that is acceptable but nothing more than that, and an overload of just-ignore-it material. I can go deep into these comparisons, but I won’t right now. Let’s just stick to this: Mettadone are, at least to my (modest) opinion, part of that first category.

Seriously, what these guys bring is indeed quite ‘predictable’ and ‘known’ Goth-inspired Metal stuff, but with a fantastic execution / song writing / sound / atmosphere. Let’s go little deeper into those four elements, all right. The sound, to start with, is marvellous. Yes, it’s clean, and yes, it’s quite polished, but for once I just feel that this is the best production that might strengthen this release. The raw grunts remain low-tuned, the synth lines are quite prominent without taking over the lead, and all contributing things (bass, percussion, rhythm guitars included) are decently mixed in order to express their own identity. The song writing, execution and atmosphere are quite inter-strangled, but it all starts with the writing of the compositions. Evgeniy surely didn’t want to create something avant-garde, something that would renew the whole scene. Why should he anyway. But he gave it his own angle, his slightly different view on things going on. …Which brings me, quite easily, to the performance. Without the assistance of good studio production at the one hand, and devoted / dedicated co-musicians at the other, the result wouldn’t be that convincing. Actually, Mettadone did not create the most world-shaking tracks ever but let’s be honest: aren’t they above average (at least compared to the pulp we’ve to cope with lately)? Indeed… It’s the little details that make the difference, like some magnificent riffs, outstanding solos, catching synth melodies or whatever… All this makes the atmosphere quite attractive (unless you prefer the poppy approach). This album surely isn’t the most ‘darkened’ recording ever (at all), but for sure there is an intensity, an asphyxiating atmosphere that makes the listener gasp for air from time to time. And such suffocative experiences, well, let’s say that I adore those…

For a Wolfshade Records album, it might be quite darkened, focusing on depth and intention rather than catchiness or prediction. Together with the fantastic song writing and execution, it might result in my preferred Wolfshade Records’ release to date. Damn yes, that’s quite subjective, but I am the reviewer in charge, okay?!