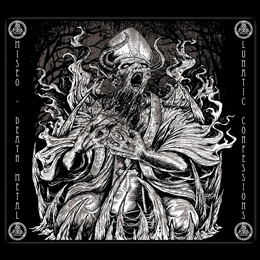 Miseo are a very young German band that released a first EP, called The Dead Will Predominate, in 2013. Earlier this year, the members entered the Marburg Records Studio and the Cubeaudio Studio to record their first full length. Blacksmith Records’ Timo Rotten took care of the mix, and the mastering was done at the Desert Inn Studio with Thilo Krieger. Line-up: vocalist / guitar player Fernando ‘Ferli’ Thielmann (founding member of Milking The Goat Machine, and formerly in e.g. Bloodsky, Reincarnated and Sarx), drummer Timo Claas (active in Lay Down Rotten, and ex-Act Of Creation and E 605), and bassist Andre Rink (ex-Amazing Grave).

Lunatic Confessions is an eleven-tracker with songs nicely clocking in between three and four and a half minutes (with exception of the instrumental opener Trapped In Veil, which is a great semi-acoustic opener, showing professionalism). But as from Daddy’s Girl on, Miseo show their true face. …and it’s an ugly, scarred one. With this album, the band brings a modern mixture of USDM and North-American styled Tech-Death with elements of the German scene, injected by more than just coincidental hints of Crust, Grindcore, Groove and ‘just Death Metal’. In general this recording became a rather classic one with nothing that bothers, but, let’s be honest, nothing special either. Haven’t we heard it all before? Okay, sometimes I heard it before in a less impressive way, that’s right. But after a couple of songs, I’ve had it. Nowadays you need to impress with more than this collection of songs. Miseo might be a side-project by the members, but it does not mean they have to act so arrogant by … WTF, what am I writing right now?... These guys are probable inspired by the likes of Misery Index, Cannibal Corpse, Obituary, Entombed, Lay Down Rotten, Kataklysm, Dying Fetus, Bolt Thrower (ever heard about No Guts, No Glory?...) etc., so if they decided to write and record some material in that very same vein, well, why not. It’s nice, it’s fun; let them do. No fillers, no killers… I just won’t recommend it if -etc.- but at the other hand, and let’s be honest, do not forget the roots this scene has been built upon!