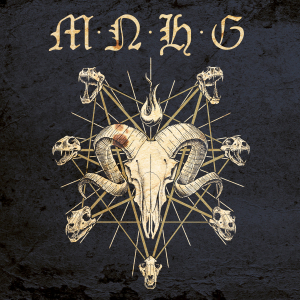 I was quite a ‘fan’ of German Black Metal paganists Thyrgrim, but for some reason, after quite a fine curriculum vitae, they decided to put the band on hold. A pity for sure. But some of the members decided to continue, and this under the moniker of MNHG. It maintains comparisons to Thyrgrim, but the core is quite different, as I will explain immediately.

And there was given to him a mouth speaking great things and blasphemies… with Black ‘n’ Roll! …

Anyway, with a newly recruited drummer, three Thyrgrim members composed and recorded a couple of new pieces, finished in May 2020 at the famous Liquid Aether Studio (think: Grimoire De Occulte, Goatblood or Dodenkrocht, amongst others). Around that time, the band signed a contract with Belgium’s finest Immortal Frost Productions for the physical and digital release of that first MNHG album, called Mundare. It means ‘to clean’, yet probably, I guess, to be interpreted as ‘to purify’. There are five-hundred compact-discs (the so-called ‘jewel-case’ edition), which do include a sixteen-page booklet, available via the band and the label (links: see below).

Well, as said, there are a few comparisons, yet especially new things to discover, compared to the band’s former raison d’être. Comparable are the pounding grooves and the raw sound, as well as some specific excerpts that breathe an epic conviction, courtesy of Thyrgrim. Such example is the short instrumental outro Transition; but I’ll come back on the sonic content immediately.

So, the core is quite (totally) different. It starts with the lyrical side, for example. Texts are now in English instead of German. The German language fitted to Thyrgrim’s stuff for sure, but in MNHG’s case both German and English would just do fine, I think (nothing but a personal, subjective opinion, which you might ignore; however, since this is my review, I can add whatever I want, haha). Also the lyrical content differs. MNHG has a very misanthropic, blaspheme and hateful textual approach, occult and diabolic in essence. The rise of the antichrist, the sadistic rape of angels, the destruction of all temples of monotheist ceremonial subservience, the whore being the mistress of the virgin; I see visions in red, covered in fog and flames…

Time flies by, you will die sick and old. Don’t waste your life, why not serve the bloodred throne?

After a short introduction (which says it all!), MNHG bring forth their core of existence. Mundare stands for a dynamic and rhythmic form of Punk-laden material with a pit-black edge and a grooving play. My first thoughts went towards Sarke, ‘contemporary’ Darkthrone, Vreid or Doden Grotte; even earlier Venom or Bathory’s Octagon do come to mind. It gets labelled as ‘Black ’n’ Roll’, but it’s more than that, even though this description fits for the better part. Most pieces are based on an extremely powerful instrumentation, consisting of chopping drums, down-tuned strings, and hoarse yells with a blackened edge. All this gets injected by some short yet fine-tuned solos, some ‘other’ vocal contributions, and a production so greasy, so indolent, so dingy. Damn, that sound invokes any deity of putrescence, any lord of maggots, any horrific creature rotting away in Purgatory. Important however is to notice the well-balanced mix, with all individual elements being represented equivalently. The low tones of the basses, the necrotic-sounding guitars, the frenetic screams, the adventurous drum patterns, and the few solos, they all have they role to play to make this whole experience a vehement soundtrack.

The better part is quite energetic, with a tempo that thunders and blusters. But Mundare is not a blasting experience, some hyper-kinetic frenzy speed-up thing. Okay, these guys go fast, many times, with that ‘no regret, no surrender’ mentality, but rather there is a mid-tempo speed going on, once in a while even doomed within its heaviness. Since there is some sort of catchiness going on, the lack of all-devastating blasts creates a certain modesty; I mean, otherwise it would sound all over the top, and exaggeration results in stupidity. Luckily that is not the case right here. And this quartet proves that you do not need to go into pyroclastic eruptions to make the audience bang their (pretty) heads the whole of the time.

However, one single point of criticism. The individual compositions might sound ‘alike’ for a big part. Once in a while you might think: hey, didn’t I just listen to this riff, or haven’t I heard this fragment before? Even after several listens, undersigned struggles through this muddy experience in order to dissect distinctive chapters. As an honest reviewer (horned smiley included), it’s my duty to mention this. But hey, Mundare surely is a recommendation if you can appreciate timeless Black / Thrash / Punk / Groove Metal! Black ‘n’ roll for the sick-minded amongst us, baby!