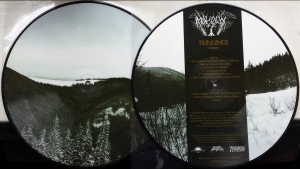 No introduction needed – check out on of the (many) reviews I did in the (recent) past for this outfit from Ukraine. Just enter the project’s name in the ‘search’-tab above, and you’ll be able to find more than a hand full of other reviews that have recently been written and published for this solo-outfit of Mr. Sergiy Fjordsson.

This is a ‘cool’ release, which once has been done the digital way, yet as well, via Legs Akimbo, on vinyl, being in a picture-disc edition (!). And seen the label, it’s quite remarkable, for Legs Akimbo usually focus on Grind/Speed/Terror/Whatevercore stuff. But it does not matter, for this release is, once again, a typifying Moloch creation. Both sides come with a wintery landscape, you know, snow and trees, an Arctic atmosphere and Siberian coldness, desolation and endlessness, and at the same time the warmth of my beloved Mother Nature. Alone with the trees, the stars, the sad souls dwelling within ancient woods, unspoiled, free from the sickness called humanity. Sorry, I’m letting myself go – back to (hard) reality now…

Horizont got originally recorded on so-called reel-to-reel tape recorder modus somewhere in the Carpathian woods during Winter 2012-2013 (what did you think: in Summer???), and it comes in an edition of 250 copies (maximum 249 left, haha, for I have my copy…). And well, it’s a characteristic Moloch release in every aspect, as mentioned before, at least when talking about this project’s ambiental part especially.

Side A starts with a fine soft-symphonic introduction, Eine Majestätische Dunkelheit Verdrängt Die Dämmerung, which stands for two minutes of Dungeon-Ambient with a dreamlike atmosphere. Wenn Die Sterne Nicht Mehr Scheinen is a depressing Black Metal piece, you know, the burzumesque way, which includes some spoken words (though I’d prefer to call it ‘mourning yells’) by Sergiy, and some female voices by Lilita Arndt, who did co-operate with Moloch several times before. It is actually the sole ‘blackened’ or ‘metalized’ piece on Horizont, so I think it’s quite bizarre. Following tracks Ein Uralter Sternenhimmel and Tod Ist Nur Der Anfang, as well as Letzte Strahlen Der Sonne Scheinen In Eisigen Kristallen then again are like a pseudo-cosmic Dark Ambient creation, based on floating melodies, and therefore the opposite of some minimally performed (quasi field recording alike) things. In Die Unendlichkeit Der Gedanken goes on in the very same way, but here I do hear quite a lot of influences from / references to Mortiis’ most suicidal project, Vond.

The B-side consists of three lengthier compositions, In Dem Gewaltigen Wald Wo Das Echo Sich Selbst Verliert, Von Der Schwingenden Dunkelheit Über Den Wäldern and the title track. These ones are like long-stretched, naturally-organic and dreamlike-atmospheric hymns, quite elementary and low-simplified, like soundwaves of introspective meditation, soft-droning spheres of melancholy and inner emptiness.