Moloch (Somewhere On The Forgotten Paths) 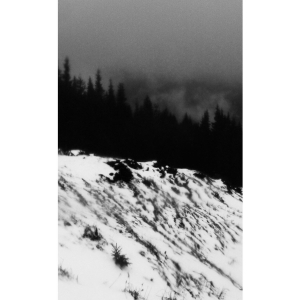 One of the most productive musical projects, as you surely know, might be Ukraine’s Moloch, an outfit by Sergiy Fjordsson, who also runs Depressive Illusions Records (+ some sub-labels), and who acts in a couple of other outfits. In the past I did write reviews for just a handful out of the 777 releases, such as Abstrakter Wald (the Metallic Media-issue was updated on October 8th 2014, the re-issue via Frozen Light on January 3rd 2016), Die Isolation (see upload December 24th 2015) or Verwüstung (check the update of June 7th 2015). In the near future you might expect some writings on the splits with I Shalt Become or Voidstar, or for releases like Horizont (the picture-LP edition) or another re-edition of Verwüstung. Several amongst them will be released via Locust Amber Records, which is a sub-division of Noisecore-label Legs Akimbo, and the same goes for Somewhere On The Forgotten Paths.

Actually, this album is a compilation that was initially released at the end of September 2010 via Malaysian RDL Distro, a sub-division of Singapore-based RDL Records, and there were re-issues via, of course, Depressive Illusions Records, or the likes of Fallen-Angel Productions and Black Metal Cult Records.

There are three important differences this time in between Locust Amber Records’ version and all former ones. In the first place, but that might be the least important difference, the artwork: pretty comparable (trees in a desolate, cold landscape) yet different from the original cover art. Secondly, it’s a fact that this edition is on tape for the very first time. But pay attention, because this one is strictly limited to 50 copies, being ten in orange, ten in sage green, ten in dark green, ten in grey (no, sorry, nine in grey left…), and ten in dark grey. And the third, but probably most important difference, is that this version has a totally different track listing. About half of the songs from the original version(s) aren’t on this specific re-issue anymore (that’s why it might quite interesting to search after the original compilation-CD as well), but there are thirteen other tracks that didn’t make it to the former editions (amongst a Xasthur-cover).

Anyway, the cassette starts with In Entlegenen Walde Wurde Ein Grausiger Winter Zu Grabe Getragen, which actually is another reinterpretation of the ‘legendary’ funeral march Marche Funèbre. It has been done a thousand times before, but once again this specific interpretation is mostly attractive. Next are some tracks that made it to the former editions of this compilation, starting with Die Vergangenheit Im Wechsel, also taken, like the intro, from the 2008-album Misanthropie Ist Der Einzige Weg Zur Reinheit. This for sure must be one of the most experimental pieces ever done by Moloch, starting off quite integer and ambiental though injected with slightly hysterical and tortured screams, and then, after a mostly weird sax (?) intermezzo turning into dimensions of grim and blackened frenzy, before ending within a semi-divine situation of sonic levitation (hey, ever imagined this might exist? As from now on it does…) in the vein of the opening sequences.

It does set the tone for this sampler, for it compiles all angles Moloch stand for: the expressive, nasty side translated through (especially) primal and primitive, highly raw and grim blackened outbursts at the one hand (Burzum, Nebel, Striborg, Xasthur, Ildjarn), and (less prominent, yet still…) the introversion of Nature-Ambient / sound field recording / Minimal Ambient explorations at the other hand. With exception of some previously unreleased compositions or a couple of demonstrational recordings, the tracks especially come from different albums from the era 2008-2011 (like higher-mentioned Misanthropie …, Isolation Der Essenz or Illusionen Eines Verlorener Lebens, amongst some others) [once again: this wasn’t the case with any former release]. For sure, and of course, it sounds recognizable, but still this material succeeds to maintain that something extra, which one needs to go on liking the efforts. Despite the primal execution, Moloch have always succeeded to come with that something ‘distinctive’, something that keeps you addicted in one way or another. This compilation is a convinced prove of that approach.

There are several compilations for Moloch in mean time, but I think this one must be one of the most interesting ones, for it overviews quite an open-minded approach on this project’s sonic spectrum. I think it might be quite impossible to have an original copy of about all releases ever done (even I, being a fervent collector who does buy a lot myself, have not enough money to buy every singly Moloch-release), and therefore I think such varying and, at the same time, exceptional compilation might be quite interesting for those who want to get deeper into the raison d’être of this Ukrainian project. Go for the tape-edition, folks, because of the interesting additions; you will not be disappointed, I promise you!

[the score is a subjective given, for I do not see the point of giving points to a compilation – but it does show my appreciation…]