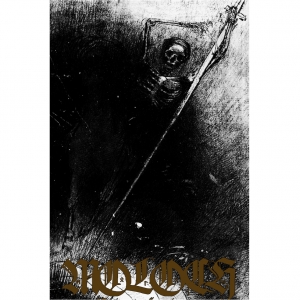 Like many Moloch-releases (a couple of hundreds), Verwüstung too has been re-released, re-re-released and re-re-re-rereleasedreleasedrereleased several times before. Actually, I wrote a review for this specific album, one of the CD-editions, for the re-release on Hidden Marly Production – see update June 7th 2015. And now the material gets redone once again, this time via Legs Akimbo-sublabel Locust Amber Records (the blackened sublabel with tape-releases especially; click on the label’s moniker above to find out more highly interesting releases). Many times, Moloch re-releases come with additional material, but in this case it’s not the case. But in each case…

The album was dedicated to Burzum’s Varg Vikernes, the guy we all love and hate, and the music was written and recorded in Winter 2012-2013. Sergiy Fjordsson recorded the keyboards, vocals, guitars and bass lines in Autumn and Winter 2013 at the S.o.h.D. Studio, and this time he was assisted by drummer Gionata Potenti, one of the most active musicians from Italy (think: Glorior Belli, Manetheren, Handful Of Hate, Frostmoon Eclipse, Deathrow and tens of others). And oh yes, the lyrics were originally written in between 2002 and 2006, but translated for this recording exclusively (even partly in Latin!).

Opening piece Todesstille is comparable to stuff in the vain of… Well, I can mention hundreds of releases of course, but let’s stick to the nihilistic, minimal spheres on Abstrakter Wald or Nur Die Berge Erinnern Sich Die Winde Die Hier Ihren Anfang Fanden Vor So Langer Zeit, for example. Blutmond then again is a blackened whirlwind that combines epic supremacy and war-lust with old styled Black grotesquery; and with ‘grotesquery’ I am not pushing towards inferior comparisons as in mindless ‘grotesque nihilism’. It’s rather the burzumesque (didn’t I mention the sort of ‘tribute’ to Mister Vikernes…) or darkthronish kind of nastiness you will experience, and who are you to dislike that finesse and glory? Indeed, that was my point too…Spiritueller Selbstmord goes even further in intensity, and that’s such fine thing. Since Moloch seemed to fade away in rather dreamy yet monotonous Ambient escapes only, it’s truly fabulous to notice that an album like this one goes back to the roots of metalized malignancy too. It’s not that I do dislike the ambient direction; I truly adore the likes of Vinterriket, Winterblood or Sieghetnar, amongst others. But as a Black Metal ‘fan’, I am glad that Moloch come back with quite some sonic aggression too, which wasn’t that evident anymore since quite some time, I think.

Verwüstung is a Black Metal piece of art (something else than the many Ambient-oriented releases), that will get adored by ‘fans’ of the True Underground. No matter if you focus on the vocals, instrumental leads or rhythm section, or song structures; it will surely captivate and intrigue! Ave and hail and stuff… But both the first and the (lengthy) last ‘song’ have nothing to do with ‘metal’, but once again: if you are trusted with this project’s material, you might know what to expect; if not, you need to give it a try! Seriously, you need to do so!