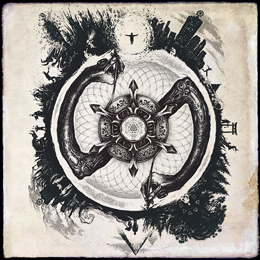 Founded in 2010 as a side-project for guitarists John Browne (Fellsilent) and Josh Travis (Tony Danza Tapdance Experience), this band has nothing to do at all with the Dutch Black/Doom Metal act by the same name, which formed in 2012 and self-released its 2-track debut EP The December Sessions in February of last. Nay, this Monuments is a Progressive Metal act, which is capable of making a perfect marriage of complex structures and melodies!

In its short career, the band not only changed status from project to full-time act, but also already went through several line-up changes, including Travis being replaced by Paul Ortiz (of fellow djent band Chimp Spanner), whom in turn was exchanged for current second guitarist Olly Steele (formerly of Cyclamen). Current lead singer Chris Barretto (of Periphery and Ever Forthright fame) was preceded by Matt Rose, Greg Pope, and original singer Neema Askari (formerly of Fellsilent). Completing the line-up are bassist Adam Swan and drummer Mike Malyan. And as I have no info relating to when exactly the former members left/were exchanged, I cannot tell you whom was on the band's first recorded effort, the 2012 released full-length Gnosis. For some reason, I felt that we at ConcreteWeb might actually have come across that album, but some extensive search learnt me that we indeed had not!

Well, anyway...with Barretto as their new singer, the band now comes along with a second studio album, which in many ways is to be seen as a musical counterpart of its predecessor...so you can again expect complex structures combined with a surprising feeling for melody. Also expect the music (the term “djent” already having fallen) to move from more atmospheric to more brutal (the atmospheric parts actually accentuating the overall brutality), with a singer whom sings both clean and brutal parts, and whom occasionally gets harmonic backings from one of the other guys! Say, in stead of trying to explain the band's music and lengthening this article, why don't we cut things short for once, and re-direct you to the band's own (http://) thisismonuments.com (where you can view the official videos of the debut album's tracks “97% Static” and “Regenerate”, as well as the official live recorded “Empty Vessels Make The Most Noise”) or to the band's page on SoundCloud (find link at (www.) centurymedia.com), where I hope you'll be able to listen to some songs off the new album as well...because otherwize you may well have to do with the 30-second samples usually provided by your trusted online sales sites (such as Amazon and iTunes).

Say, before I forget, this album not only comes in regular CD and 12-inch vinyl formats, but also as a download and Limited Edition CD, the latter two carrying 3 bonus live tracks! Meanwhile, let's swiftly place “The Amanuensis” into our year-lists, and move on to the next review.