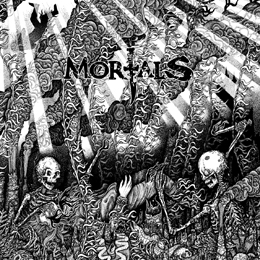 All-female band Mortals (Caryn Havlik, Elizabeth Cline and Lesley Wolf) hail from Brooklyn (United States of the New World). Some of you might remember the highly acclaimed Death Ritual EP, self-released in 2012. Now they return with their first full length album for Relapse Records, Cursed To See The Future, which lasts for forty eight minutes. That’s nice, for it consists of six songs only.

Cursed To See The Future brings, and now I will refer to the biography, ‘extreme riff-driven metal sliced into meaty chunks’. The album goes on in the vein of the 2012-EP, but it’s darker, more Black-oriented and little more sludgy as well. Each track has an own, specific sound, and the variation in between them is grandiose. Opener View From A Tower, for example, is a song based on the timeless tradition of nasty Black Metal, while Epochryphal Gloom, the second song, comes with a very Sludge-oriented approach. The Summoning is more like the opening track, based on traditional details (which does not mean that it lacks of personality!), with a fine balance in between rhythmic power and melodic fine-tuning. Devilspell has a massive sludgy approach comparable to Epochryphal Gloom, but with riffs that sometimes sound more stonery. Series Of Decay is, I think, the most USBM-alike track on Cursed To See The Future, and to my concern the most outstanding track on the album. Final track Anchored In Time, to end with, comes once again with a certain Sludge-injected approach and even a subtle Stoner-attitude.

Cons: not that much distinctive from the crowdy scene