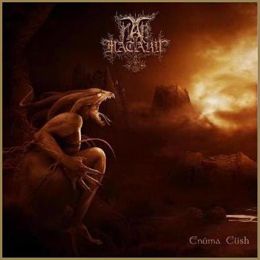 Nar Mattaru are a band from Chile, consisting of two members of the original line-up of Chilean cult-act Dominus, Francisco Bravo (b, g) and Andrés Gonzales (d) (later: Dominus Xul). A first official effort was done in 2009: the demo In The Black Spheres Of Time, featuring vocalist (read: throat) Carlos Artarys.

With the Sumerian mythology as lyrical source of inspiration (you cannot blame them), the trio recorded their debut full length in 2011 (originally released locally through a small label called Pacto Records, and now re-released through the splendid I, Voidhanger Records as an appetizer for the upcoming sophomore full length later this year – and I do hope rather sooner than later!), consisting of nine tracks with a total running time of almost sixty three minutes. The average duration of each song (one lasts for two minutes, the others in between six and ten) is pretty long for primal Death Metal, but in this case it isn’t but a surplus.

The album includes the tracks from the 2009-demonstrational recording (with inclusion of the Incantation-cover Abolishment Of Immaculate Serenity), some new tracks, and two other cover songs, Twisted Mass Of Burnt Decay (Autopsy) and Tirano Constrictor (Kratherion).

Even though Nar Mattaru have progressed a lot in comparison to the past, there’s still an undeniable hint of Dominus / Dominus Xul, of course, yet less blackened and much more deadly. This old, very old schooled Death Metal is basic-to-the-core, primal and primitive, yet technically perfected and perfectly technical, nicely balanced and of a purity that wonderful (note to myself, and to those who might care: another dank-U-verriematch to I, Voidhanger!). And even though the production isn’t that great (cf. Pablo Clares of Totten Korps / Atomic Aggressor / Azael / Megiddo / …-fame), the total quality (song writing, performance, and the execution of the cover tracks) is way beyond average.

Some worth-mentioning-stuff: sweet equilibrium in speed (from slowly rotting to blasting decomposing), the gore beauty of occultism in both instrumental approach and vocal contribution, and the initial dark-edged vision of Dominus Xul that still covers these lullabies with sardonic and sadistic lunacy.