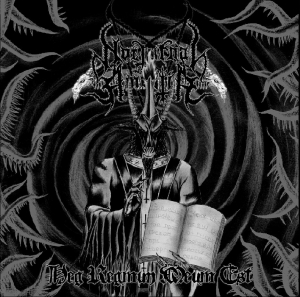 Quite an active act from Ukraine is Nocturnal Amentia, formed at the beginning of this century in the Lugansk area. The band released four full albums in mean time (the last one being released a couple of months ago via Cold Breath Of Silence), and they contributed on two splits; one with UK’s Black Grave, and another one with fellow countrymen of Underdark (sharing a member, by the way [*]).

At the end of 2012 they did release the third full studio recording, Hec Regnum Meum Est. Since Hass Weg Productions kindly offered me that release, I am so kind too, to have it reviewed – it’s never too late to focus on great material from the past, you see… Honor to whom honor is due…

The material of Hec Regnum Meum Est (which was originally released in an edition of 1,000 copies, so you might still find one if interested – and why shouldn’t you be not interested anyway, so go for it!) was recorded during Spring 2012 (do you hear the new-born birds singing joyfully?...). It brings forty minutes of grim, fast, thrashing and filthy Old School Black Metal, focusing on nothing but the purest essence of the scene, lacking any kind of gimmick or fake trend.

Seriously, this band is able to delve deep into the origins, when writing and performing true and honest, uncompromising Old Style Black Metal. And despite lots of ‘traditional’ things, I’d like to refer to the vocals of Daemous in the first place. His throat does not sound like most of our beloved Black Metal chanteurs. Rather it is a hoarse voice, coming from deep out of the belly, and in some way reminding me of some Hungarian colleagues especially (as well as some other East-European ones). For sure it gives another dimension to the material, adding an unusual level of utter grimness. It will bother some listeners, but my message to those: f*** and [self-censorship]! I surely appreciate this little ‘different’ approach.

When talking about the whole, the compositions and the performance (I come back to the production in the next paragraph), are nasty, fast, merciless and violent. With fast I mean really fast, even blasting, and this goes for the better part of the album. Though there are some less fast excerpts too (I mention ‘less fast’, for even most of the ‘slowest’ passages are still like lightning). And you know, the limited mid-tempo parts do add a certain level of Post-Black grandeur, to my opinion, especially within the more dissonant-melodious excerpts – just concentrate on a piece like the last hymn, Quod Est Dominus Tuus, and you’ll see hear. That is a welcome element, for it acts like some counterbalance to the old styled aggression. Within the fastest moments I sort of need to think about the Swedish scene, with acts like Marduk coming to mind, at least seen from structural point of view (cf. the hammering drum eruptions and the piercing guitar riffs especially). In general, the rhythms are quite uplifting and even catching (not of the emotional kind, but that’s evident, I guess), with a focus on guitar-driven melodies and thrashy injections.

Sound-wise there is not that much to complain about. The result is quite ‘traditional’, with a great mix for all contributors. The compositions are quite guitar-driven, but it does not mean that the rhythm section (drums and percussions, bass guitars and rhythm guitars) are mixed to the background. No, actually the equilibrium is of a very satisfying quality, and I think it’s a great job, for each individual player performs an important role in order to create such coherent result.

To be honest, I am still hungry, waiting for a memorable highlight to come. Everything has been done quite professionally, and for sure with full persuasion and conviction, but there’s that something ‘more’ that I am missing. But then again, Hec Regnum Meum Est is a mostly enjoyable experience (hehe, ‘enjoy’ and Nocturnal Amentia, what a lapsus…) which will appeal to all ‘fans’ of blackened and thrashing sonic violence.