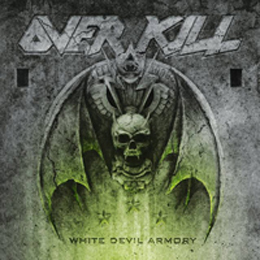 Line Up : Bobby “Blitz” Ellsworth – VocalsDave Link – GuitarD.D. Verni – BassDerek Tailer – GuitarRon Lipnicki - DrumsWhen we think about thrash, the big four of ‘Metallica, Megadeth, Anthrax and Slayer’ are usually the first thing that come to mind. There has always been a second tier of bands like ‘Overkill’, ‘Testament and Exodus’ that never quite reached as great a level of commercial success. Nevertheless, they have continued to tour and make records for a small but devoted fan base.‘Overkill’ has maintained a work ethic similar to ‘Motorhead’, the band after who's song they're named. Their 18th studio album comes 29 years after their first, with singer ‘Bobby "Blitz" Ellsworth ‘and bassist’ DD Verni’ on board for the whole ride. It's Blitz's vocals that set the band apart from its peers. His voice is higher pitched than most, and boarders on screeching. He would have been at home singing about wizards and dragons in a metal band from a previous generation. His pipes are in fine form here.The album opens with a brief orchestral (synthesizer?) piece. It sounds like something from a film that would play right before the gladiators attack. Without a hint of irony, it's letting us know that something epic is coming. The second song, ‘Armorist’, is probably the most epic song on the record. It's very fast and very catchy. The double bass drum is so fast and precise, it's almost hard to believe it's played by a human. ‘Down to the Bone’ has traces of the orchestral intro. ‘Pig’ is another memorable song with a sing-along chorus. ‘Bitter Pill’ has a mellow intro and outro, with heaviness in between.The fact of the matter is, there's not a real top song on the album. Every song is at least solid, but none of them bring anything new to the table. The songs follow a familiar pattern, and can get a bit tedious over the course of 50 minutes. The biggest weakness of this record is the lyrics. Metal bands generally aren't known for their words, but most thrash bands cross into sociopolitical territory. Sometimes it seems like ‘Overkill’ is trying to do just that, but there is no coherent message. Even after scrutinizing the lyrics, the meaning of’ White Devil Armory’ is not clear. Is it a taunt to terrorists? A statement about America's strength? None of the above? The album ends with ‘In the Name’, another epic song that seems to be trying to say something, but the message proves elusive.This will probably not have much appeal outside of the thrash faithful. It's not bad, but doesn't have that extra something that might draw in new listeners.’ White Devil Armory’ is strictly for those who have fully embraced their inner headbanger.