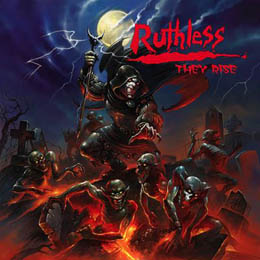 With their EP ‘Metal Without Mercy’ (1984) and the album ‘Discipline Of Steel’ from 1986 RUTHLESS from L.A. got a special place in the hearts of all US Metal fans. Since 1990, the Californians were on hiatus for almost 20 years. The revival took place at Keep It True in 2009. Five years later we’re finally proud to announce the first studio album after almost 30 years.

Responsible for two classics of the metal underground the 1984 EP ‘Metal Without Mercy’ and 1986’s full-length ‘Discipline of Steel,’ Ruthless picks up exactly where they left off with their new disc.

‘McGee (Bass)’ is a firm believer in the new material (which was produced and engineered by ‘Bill Metoyer’ (‘Slayer, W.A.S.P., Armored Saint’). I think this new album compares to the ‘Metal Without Mercy’ album. The opening song, ‘Defender,’ just kicks your ass !  Second song, ‘Laceration,’ is very melodic/slow picking in the intro, and then kicks into a killer double harmony riff. Third song, ‘They Rise,’ is another favorite  heavy bass riff and guitars. It lifts you up and drops you down. Also, ‘Time Waits’ is a slower song with very emotional singing – ‘Sammy DeJohn’ tears it up on the vocals.

Beginning today, fans will be able to rediscover/discover one of the best kept metal secrets of the 1980’s.