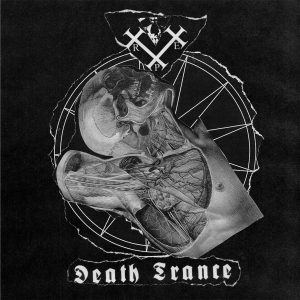 I do like Dunkelheit Produktionen a lot for two reasons: the very sympathetic guy behind the label (big hug to you, Bernd), and their great roster. The label has a lot of excellent Death and Black Metal signings, and since I am a ‘fan’, and so on…

But hey, this label goes further, much further. In the (near) future, I will write some reviews for stuff that dwells in other genres, like Dungeon Synth or Industrial (and I recently did one in the meantime, for Iagon). This release too has nothing to do with (Black / Death) Metal whatsoever, seen from purely sonic point of listen.

RxAxPxE are a German outfit that dwell, for about fifteen years, within the spheres of Power Noise Industrial Electronics (yeah, whatever). No, seriously, this project brings stuff that is at least as nasty and intense as Extreme Metal, yet from another source of Sonic Evil. The album consists of three elegies, which clock half an hour, being released on both compact disc and vinyl (and of course it is available digitally too). The CD edition is a ‘normal’ jewel-case one with a four-page booklet (and poster). There are two vinyl issues, 200 in ‘normal’ black and 100 copies on red vinyl, coming with a poster (A2) in paper-bag. I have no idea about the cover artwork artistics (it got designed by one BrianVDP), but it surely is fitting to the monstrous, barbaric muSICKal part of the game.

As from the opening sequence of the first, eh, ‘song’, called Dancing in Ashes Part II (Eradication), you know that the choice of this recording’s title has been chosen carefully. Death Trance indeed might be a definition of what this album stands for. It starts somehow militaristic, with those martial beat patterns, which are extremely trancelike / hypnotic too. This very lengthy composition (it clocks almost fifteen minutes) shows the intriguing vision of the artist behind the project: the ability to combine the harshness of semi-static Power Electronics with an oppressing and occult ambience. This exceeds and overpowers the lability of random noisy harshness, for it delves deep into spheres of hypnotic, ritual and horrific dimensions.

RxAxPxE combine almost tribal (!) pulsations, warlike beats, claustrophobic obscurity, torturous noises, mesmerizing rhythms, wretched screams (and some invocative whispers), screeching sound manipulations, droning dissonance and low-tuned bass frequencies, being canalized into a colossal wall of Terror Noise (I admit that I stole this sonic definition, ‘Terror Noise’, from the label’s album information sheet; but it surely fits). It is an aural mind-fuck for sure, but at the same time a sonic satisfaction, because this project trespasses the limitations of the Noise / Power Electronics scene by adding that ritualistic, macabre and diabolic atmosphere. Glorification of the Dark One through the most disturbing, sick sounds directly originating from the depths of the human soul, or what about malign invocations […] of only the darkest art of sound… (quotes also taken from the bio; damn, I seem to be lazy).