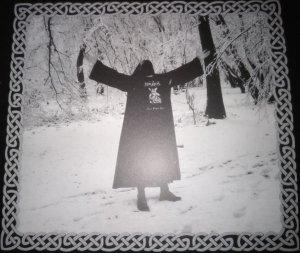 One of the many (solo) outfits by English gentleman Nox, here known as Shadows, is called Sacred Dominions. You might recognize this guy as well from projects like the productive duo Wolves Eyes, sadly defunct Forest Grave, Sinisterite (which also includes Molestor Kadotus and Shatraug; unfortunately put on hold), Martial Dungeon Synth act Folcriht or Dark Autumn, amongst several others. Some of his material was released via his very own Path Of The Wolf cassette-only label, by the way (also closed in the meantime). Sacred Dominions started in 2015, actually performing OSDS (Old School Dungeon Synth) (I know that Shadows does not like that terminology, but hey, it is Dungeon Synth; you can’t expect me to call this Gospel or R’n’B, can you?!). Soon however, the project was put on hiatus. But Shadows did have many ideas and he reformed this outfit in 2020, with one difference: another sonic approach. Instead of Dungeon Synth (or Dark Martial Ambient; this might sound more acceptable for the artist) oriented material, Sacred Dominions evolved into an old-styled and archaic Black Metal act.

As productive as (n)ever before, Sacred Dominions did record and release a hand full of material in a short period (2020-2021). The project signed to the superb Polish true underground label Lower Silesian Stronghold, and several EP’s have been released throughout 2021 within this partnership. The first one is this one, As They Rode Through The Land Of Our Ancient Pagan Kingdom. This four-tracker was printed in an edition of 300 copies, available as digipack and coming with a sober black-and-white four-page booklet, which includes the lyrics (in English evidently). The texts, as you can guess, deal with themes of heroism and victory, Pagan pride and the legacy of our ancestors’ blood. They’re not too complex, these lyrics, yet to-the-point and without fading away in superficial nonsense.

As mentioned, As They Rode Through The Land Of Our Ancient Pagan Kingdom consists of four hymns, clocking almost twenty-four minutes. And hey, as from the very beginning, this material shows it’s face; and it is a weatherworn, scarred face, hardened by battle and perseverance!

The foundation now, in contrast to the earlier years, is created around deeply underground-sounding and somewhat primally executed Black Metal with an old-styled vibe. No nonsense, just fast-forward aural intolerance. The stuff is melodic with an epic attitude that reminds of the purest and most solemn Pagan / Viking elegance of Old. Many melodies exhale that typifying sense of sonic glory, like a bathorian symbiosis of Veles and Satyricon. That approach gets strengthened once in a while by elements like, for example, those martial drum-patterns in Reclaiming The Land Of Our Forefathers. The melodious structures get proudly fortified by a skilled rhythm section (bass and rhythm guitars, drums and percussions), which is not inferior to the guitar leads at all. Especially the varied drum-patterns add this effort’s level to higher stages. The very same goes for the extremely raspy yet obstinate voices, spreading their message of spite and stubbornness with persuasion.

A characteristic element is the prominent use of synths. These are not that much at the foreground (not like Lustre or Summoning), yet still they are almost permanently active as sphere-creator or so. Once again I want to mention early Satyricon, and then especially their debut Dark Medieval Times, where keyboard were of undeniable importance as well, even-though acting as support to create that magic atmosphere. They are a surplus because of their manifest atmosphere-setting.

The better part is up-tempo oriented, with a powerful energy and a vengeful dynamism. However, the quite lengthy hymns do very in speed, which means that certain chapters are slower and calmer (even-though the intensity never surrenders), while other moments smoothly evolve into faster rhythms. There are no outspoken exaggerations (no doomed parts at the one hand, nor blasting eruptions at the other), yet still the dynamic variation in tempo has a positive effect on the whole listening adventure.

The production is extremely rough and low-profile. I think that the mix is decent, yet the result of the sound an sich could have been finished little ‘fuller’. Okay, it does fit to the primal and archaic approach for sure, but I do miss more overpowering grimness, especially within the string-section. Yet still, this isn’t but a minor detail, for the unpolished roughness goes well with the messages of uncompromising intolerance and fearless majesty.

This EP is strongly recommended if you can appreciate acts like Veles, Kristallnacht, Osculum Infame, earlier Satyricon, Graveland, Sargeist (!), you know!