Sadness (The Rain That Falls Alone...) 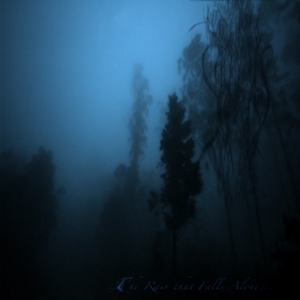 Sometimes it’s just incomprehensible that musicians can be enormously productive. Such an example is Damien Anton Ojeda aka Elisa aka E., born in Mexico and currently living in Oak Park, Illinois. He is active in several solo-projects, such as the new outfit Left Alone… or Born An Abomination, and used to release material under names such as Aevilian, A Nightlit Poesy, Iniquitous Depression and Evocative Atmosphere too. Probably the most active project by this very young guy (born in 1997) however is Sadness. Damien started this one in 2014, but in mean time there are more than three hands full of releases under that moniker. Also several other projects he created as from 2012 have several (mainly digital) releases (though many of them have been released on tape as well, via Depressive Illusions Records), so one cannot deny that this sad human being isn’t quite active.

All projects ‘Elisa’ is or was involved with have one thing in common: sadness! Without exception, all of them deal with subjects such as depression, loss, melancholy, pain, love, death, loneliness, you know, those things that do put a smile on your face… No seriously, despite the young age, it’s a strange thing to see that one can struggle with your identity, but luckily for this human being, it can be canalised via his music(k)al outlets. But I won’t write about psychological matters that can be cured via the beauty of Aural Art (as a canalisation, as therapy, as expression).

Anyway, something that characterises most of his works too, unfortunately, is the minor sound quality. This goes for this release too. It might be a pity, a lost chance. I know that it sort of fits to this kind of sonic sadness, but therefor there are things missing.

But then again, the compositions, what about them. Let’s start with once again a comparison to all of his projects, and that’s the extremely lengthy duration of each single ‘song’. The Rain That Falls Alone… does not differ. It consists of three songs that have a total running duration of forty three minutes. This release is a digital effort, available via e.g. the project’s Bandcamp-page, but there is a cassette-edition too, as mentioned before.

The Rain That Falls Alone… opens with Bewailing The Saturnine Moonlight, which is quite a ‘short’ piece, clocking just over six minutes. This introduction is mainly based on a very desolate and depressing piano melody, funereally cold and desperate. Once in a while there seem to appear some wretched, painful screams in a far distance, adding an attitude of anger and self-mutilation onto the conscious introspectiveness. Floating synth lines strengthen the suffocative atmosphere throughout the whole piece. Quite fine, and a necessity, is that the piano melody changes more than once without losing its cohesion. It’s that variation that takes care of constantly wondering. Towards the end, the melody returns to where it all started, like the full circle of birth and death.

A Tapestry Of Winter Wolves (15:37) starts with an atmospheric guitar riff of the Blackgaze / DSBM kind. The production, unfortunately, … No, I did mention it in one of the former paragraphs and right here I won’t come back to it. Slowly everything builds up, and after about two minutes the tracks shows it’s raison d’être: purely emotional Depressive Suicidal Black Metal in its most essential form. Melancholic and repetitive tremolo leads and shrieking, somewhat echoing screams get pushed forward by quite an intense rhythm section and some lovely keyboard melodies. Remarkable is the energetic tempo within these metalized excerpts. At almost nine minutes, the sonic suicidal attack (I need to be careful with such descriptions after the terroristic events that happened in Brussels earlier this week) suddenly transforms into a short Drone / Ambient interlude, before exploding (once again my apologies for the choice of words) into another heavy outburst of both inner and external despair and grief, iniquity and hatred. The last minutes, then again, are quiet and introvert, based on a minimal piano melody and dreamy synth lines.

The recording ends with the lengthy title track (clocking over twenty one minutes), which sort of summarizes the essence as defined in both former tracks. After a semi-acoustic introduction, especially based on a wavy guitar riff and with inclusion of those very distantly present, hollow screams far, far away, the track evolves in a Drone piece, still with guitars and synths as main instruments. After five minutes, everything turns grim; step by step anger, fear and disgust take over the atmosphere. But evidently there are more chapters involved, sometimes based on synth passages, then again led by emotional semi-acoustic guitar riffs, as well as powerful outbursts.

There’s no doubt that there is quite some potential, and this goes for all projects Damien is involved with. So clean up the sound quality a little (not too much, for a clinical expression of this kind of Aural Art would rape the result)! This is not a suggestion or a proposal; it’s a duty!

[PS: on this day’s update, another unhappy release by a Mexican artist has been uploaded: check out the review for Lifeless…]