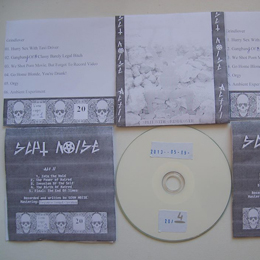 This review deals with last year’s split in between the Belgian act Scum Noise (not the Brazilian Hardcore / Crust / Punk-formation with the very same moniker), and U.K.-based Grindlover, which did release the album Deep Dives Into Holes Of Love on Symbol Of Domination Productions (which originates from Belarus, actually), a Satanath-sublabel, shortly before this split-album. Once again the release was strictly limited, but there are still some copies available… Contact the label now!

The split opens with five pieces by Scum Noise, and despite being from my home country, and despite being active for quite some time, I didn’t know their material. I am truly ashamed, for their discography seems to be enormously interesting (cf. Bandcamp and more resources). Their contribution on this split starts with a very grim introduction (Into The Void), mechanical and industrialised, and it does set the tone for what’s next to come. The other pieces can barely be called ‘songs’, for being a purely apocalyptic and anti-organic sonic expression of Chaos. It’s a totally raped interpretation of Black Metal, drenched in necrotic Death Industrial / Noise filth, and schizophrenic pseudo-cosmic-electronic aural ugliness (what’s in a name…). It’s like Aderlating, Zarach ‘Baal’ Tharagh, Enbilulugugal, Havohej and MZ.412 joining forces in order to create the most frenzy and psychopathic sonic expression of Evilness! 8,5/10