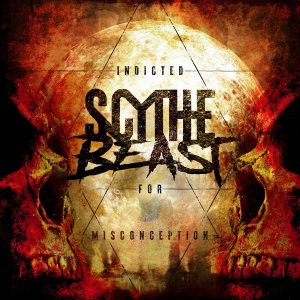 Well, you know, I do not mind -not ever- to listen to stuff that lacks of originality. I just have a few conditions: please do not act like a cheap copycat, please respect the scene (which does not mean that you cannot reinterpret narrow-minded borders, of course), and please convince me.

And that’s exactly what this German act does: playing uncompromising, no-nonsense Death / Thrash material in the vein of ‘the old school’ (whatever this might mean this time), yet without becoming some cheap ‘tribute’ band whatever.

Scythe Beast was initially formed almost a decade ago by Sven Stoppelberg and Andreas Tegeler. The duo had a first (and quite interesting) release about five years ago, called Breeding Devastation (independently released), yet since then Scythe Beast grew unto a ‘real band’, recruiting some more permanent members. And time + endurance resulted in another piece, being Indicted For Misconception. The latter is a lengthy nine-tracker, presented as demonstrational material, but actually equally to ‘professionally’ recorded stuff whatsoever.

Indicted For Misconception goes on where Breeding Devastation ended; still paying tribute to the roots of the genre. Their material is chopping and rhythmic, with a huge dose of energy and intensity, quite some variation in tempo, and a devastating sound quality. When talking about the latter, the production and all, well, this is enormously professional without exaggeration. A recording too clean would result in some pathetic of ridiculous adventure. However, right here a certain roughness remains, and that’s nothing but a good thing. And then, that mix. Waw, the equilibrium is top-notch, with all elements equally hearable. The basses, percussion, lead and rhythm guitars, vocals, you know, everything is perfectly balanced – once again, without any fake clinically-polished over-production.

Most tracks are powerful, fast-forward and uncompromising. Still, all of them maintain a certain melodic core, floating far away from any chaotic or unstructured would-be mentality. In some way, it sounds catchy, yet not of the pathetic kind, and for sure it does groove. Especially the bass lines have that characteristic grooving drive, even though the extremely varying drums / percussions too strengthen that idea of grooviness. The title track is a perfect example for this bold statement, haha. What works very well at the very same point, is the modest, somewhat hidden modernistic approach – not exactly in song-writing (for this is based on the tradition, as mentioned before) yet in execution. If I come back to the title track once more, for example, elements like that guitar solo-work or the whole drum component increase that feeling of timelessness for sure.

Once in a while, the tempo totally decelerates. That goes for some shorter excerpts in certain tracks, yet as well for some songs as well. Take Soulicide, for example (great title), whit that doomy tempo. Beware, for tracks like this one do include some blasting excerpts as well – also professionally worked out in contrast with the slower passages. For some reason, there’s even something horrific, occult, psychotic and obscure within these slowed-down parts.

Like the debut, this sophomore album is strongly guitar-based, but not purely guitar-oriented. The main structures are based on firm riffs and some fine-tuned tremolo leads (listen to that overwhelming opening sequence of Signs Of The Decline with that mighty string-work and these monumental drum patterns and you’ll understand). However, the whole instrumental background section is at least as important to support the whole story, like the spine (i.e. rhythm guitars, drums + percussion, bass guitars) strengthening the corpse (i.e. a ‘whole’ song). I cannot but mention that great percussion-work once more!

The vocals are not exactly high-pitched, yet still raw and screaming, deep-throated and vile. It holds the middle in between Thrash and Death Metal styled, which fits to the instrumental part, for here too we do balance in between the more epic parts of the Death Metal genre (strongly Swedish oriented, by the way) and the timeless approach of thrashing fury. Once in a while, like in Truth Beyond, the vocal timbre does remind me of some blackened elegance.

It would not be that crazy to compare Scythe Beast to the Gothenburg scene or to a general Swedeath-styled genre, so I am pretty sure that ‘fans’ of e.g. At The Gates, Amon Amarth, Hypocrisy, Necrophobic, Dark Tranquillity or Soilwork (I admit that this is quite a ‘general’ description, but you won’t disagree) will appreciate this material for sure, as well as adepts of acts like Fragments Of Unbecoming, Insomnium, Amorphis or Words Of Farewell.